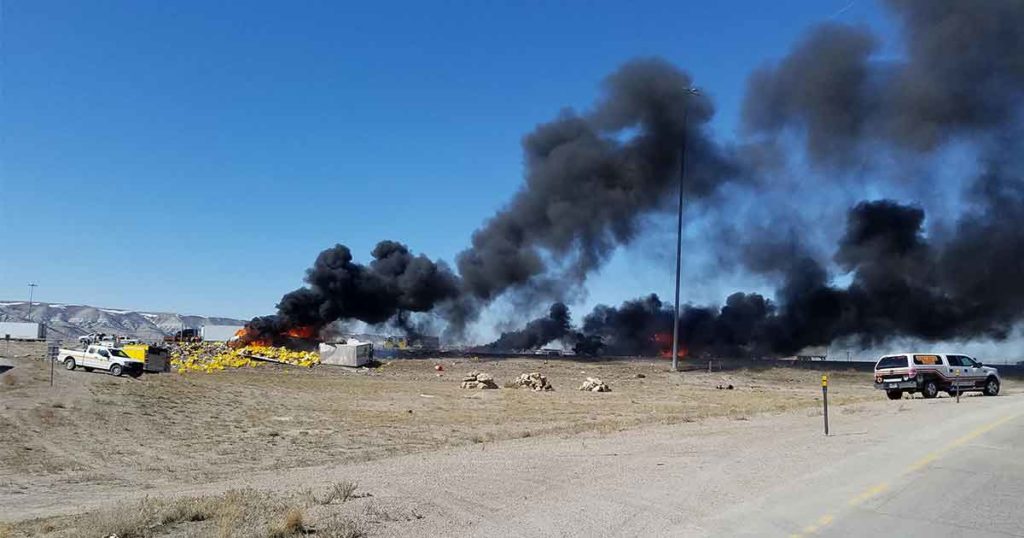 One of our readers sent us this photo of the wreck and fire.

UPDATE: WYDOT’s website is reporting I80 Eastbound at Exit 104 is now reopening. Traffic is no longer being diverted as of March 31 at 7:55 pm.

ROCK SPRINGS — After a collision between two semi trucks today, Interstate 80 Eastbound will remain closed for three to four hours as of 5 p.m.

According to Stephanie Harsha, Wyoming Department of Transportation District 3 Public Relations Specialist, two semi tractor trailers collided near milepost 104 on I-80 Eastbound this afternoon. Harsha said there was a possible fatality in this crash, which is being investigated by the Wyoming Highway Patrol.

Harsha said it appears one of the vehicles crossed over the median prior to the collision.

The collision caused one of the trucks to burst into flames, which was caught not only by our readers, but WYDOT’s webcam.

Harsha said officials are asking residents and travelers to avoid the area so the investigation can continue.

Traffic is currently being diverted off of I-80 Eastbound, however be prepared for slow-moving or stalled traffic. Due to the traffic being diverted, traffic in town along Elk Street and Ninth Street in particular are seeing congestion problems and backed up traffic.