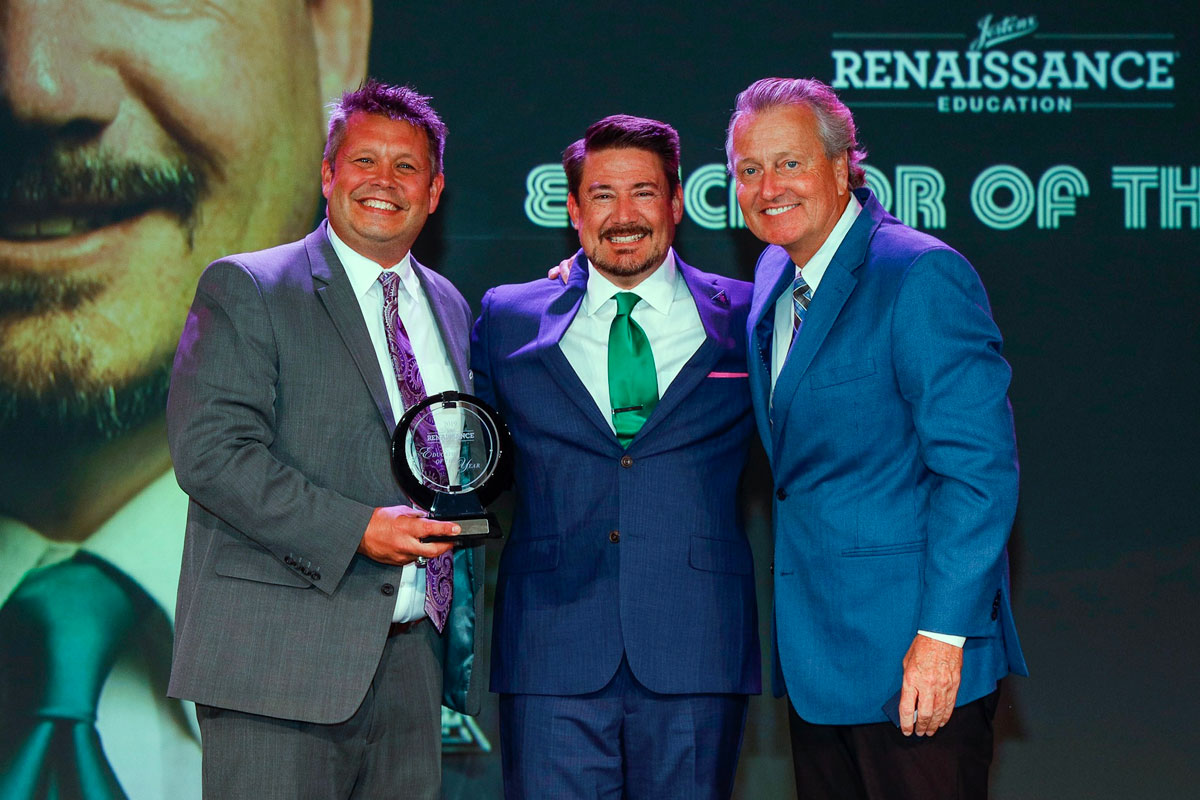 Green River High School’s Bradlee W. Skinner has been recognized as a Jostens Renaissance Educator of the Year.

The Jostens Renaissance Educator of the Year award honors educators who have demonstrated superior performance and achievement in the operation of their schools’ Jostens Renaissance program.  This year Jostens selected Skinner and two others for this highly honorable award.

“Jostens is honored to recognize Bradlee Skinner as a Jostens Renaissance Educator of the Year,” said Mike Wolf, Vice President of Jostens Renaissance Education.  “The passion and dedication of these educators, along with educators all over the world, are the driving force in impacting students’ academic performance, attendance and behavior.  They have been instrumental in creating improved morale in their schools, which has resulted in raised GPAs, school attendance and graduation rates. They have also addressed the intangibles – they have worked with their school colleagues to create an environment where every student belongs, not just attends.”

He has been in education for 18 years and has coordinated Renaissance for three years, and credits his time with Dr. Darrin Peppard at Rock Springs High School with restoring his faith and inspiration for education. As the theater director, student government advisor, and Renaissance advisor at Green River, Skinner has many ways to help students discover their potential.

A group of Green River High School students describe his impact on their school’s culture:

“Mr. Skinner has trained a student in our school who has cerebral palsy to be a DJ so he could be more involved in school sports and activities. This student has since played music for several volleyball and basketball games, the Homecoming dance, and Prom. Most of the student body now knows this student and he has found a place at GRHS thanks to Mr. Skinner, and he is not the only one.

Mr. Skinner creates a safe place for all students where they can be themselves and be celebrated for it. Mr. Skinner is simply different when it comes to how and what he teaches, the way he cares about us, how he motivates us to learn, but most of all, how he makes us feel about ourselves. We can all truly say that we are a better version of ourselves from having taken Mr. Skinner’s classes.”

For 28 years, Jostens has partnered with educators to renew school climate and culture through the Jostens Renaissance program and philosophy. Thousands of schools across North America are proud to call themselves “Jostens Renaissance” schools, sharing a sense of pride that is reflected in the results seen in improved academic performance, behavior, student engagement, and overall school spirit. Jostens Renaissance Education is a team within Jostens that is dedicated to providing conferences, workshops and content to educators.

More information about Jostens Renaissance is available at www.jostensrenaissance.com.

Jostens is a trusted partner in the academic and achievement channel, providing products, programs and services that help its customers celebrate moments that matter. The company’s products include yearbooks, publications, jewelry and consumer goods that serve the K-12 educational, college and professional sports segments. Founded in 1897 and based in Minneapolis, Minn., Jostens is a subsidiary of Platinum Equity and can be found online at www.jostens.com.