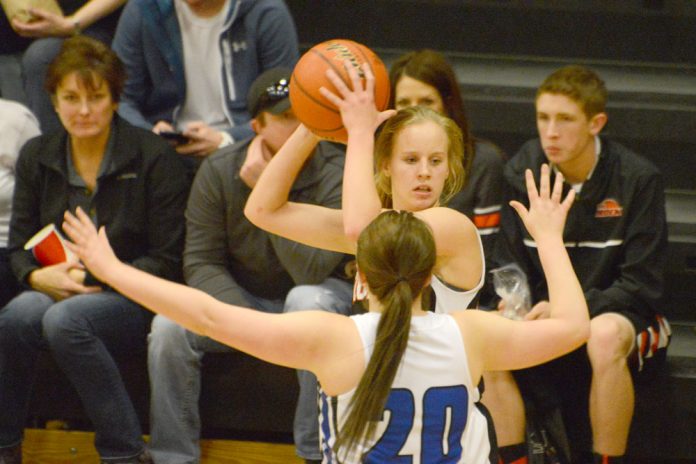 ROCK SPRINGS – A strong defensive effort all weekend was capped off with an exclamation mark on Saturday as the Rock Springs Lady Tigers only allowed 26 points to move to 3-0 on the season.

After beating Riverton and Sheridan on Thursday and Friday, Rock Springs handed Jackson a 49-point loss on Saturday, 75-26, to finish the first tournament of the year with three wins. The Lady Tigers had a balanced scoring attack led by senior Maggie Justinak who finished with 17 points. Makylee Buell finished a solid tournament with 15 while Emily Quigley also added 15 to the total. Despite struggling from the foul line on Saturday, Sarye Thomas finished with 13 points while grabbing a handful of rebounds on the day.

Unselfish play early led to a Lady Tiger lead to start the final game of the Bill Strannigan Invite. Rock Springs had a balanced attack in the first as Taylor Jenkins, Maggie Justinak, Emily Quigley and Sarye Thomas all added buckets as the ladies took a 20-point lead after one, 27-7.

The Lady Tigers continue to push the action in the second. Alyssa Vigil scored five quick points while Quigley, Makylee Buell and Justinak all added to the total. At the end of a strong first half, Rock Springs led its new conference foe, 48-15. Justinak finished the half with 12 points while Buell added eight, Quigley scored seven and Vigil and Jenkins each scored six.

The second half mirrored the first as the Lady Tigers continued to roll. Buell had five quick points and Thomas continued to put points on the board. The ladies only allowed five Jackson points in the third as they added to the lead after three, 60-20.

Justinak hit for five quick points to start the final quarter and Quigley had a big final stanza scoring eight as Rock Springs cruised to the win.