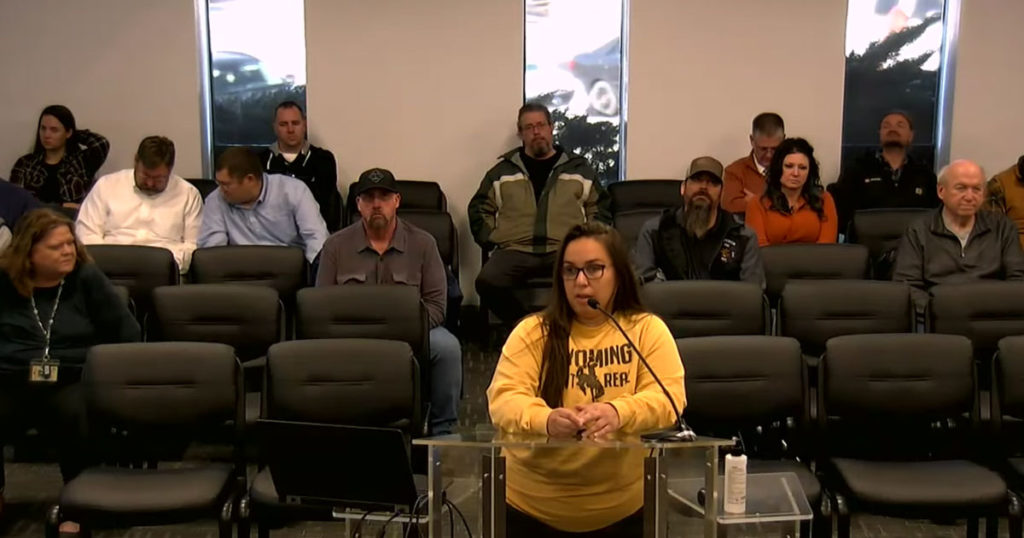 SWEETWATER COUNTY — Love’s Travel Stops’ application for a Conditional Use Permit (CUP) to allow for a new wastewater treatment system failed at the Sweetwater County Commission meeting Tuesday when the board failed to make a motion on the proposal.

The initial CUP asked for an underground injection sewage disposal system with a septic tank and leach field. However, that system failed due to the clay soil not allowing water to percolate properly. Love’s was requesting to change the CUP to a sanitary sewage treatment system that would treat the sewage and discharge the treated water into the Green River.

Love’s has been trucking its waste to Green River’s wastewater treatment plant for over a year. Kym Van Dyke, of Love’s real-estate division, said that’s cost his company around $750,000. The cost to construct and install the proposed system would be around $3-4 million and would take around five months to install.

The proposed CUP had a list of conditions including regular and consistent monitoring of the system and the water quality being discharged into the river, as well as weekly reports being sent to the Joint Powers Water Board (JPWB) and Sweetwater County.

Sweetwater County Land Use Director Eric Bingham explained that another condition would be a five-year time frame to allow for construction of the Jamestown-Rio Vista sewer line. Funding for the sewer line was previously unavailable but has now been secured through the Special Purpose Tax passed by voters in the General Election.

The proposal was met with outrage and opposition from community members. Jamestown residents were concerned about the water quality as they live upstream from the JPWB reservoir.

Commissioner Randy “Doc” Wendling said he believes the County Commission would not have approved the initial CUP had they proposed this new system in the beginning.

“I don’t believe the permit would have been approved…had they not come forward with the injection process and it would have moved into something along this design. I truly believe that,” Wendling said.

Scott Huismann, Apex Company LLC design engineer for Love’s, said the septic tank would stay in place and they would install three trains. Trains are essentially basins where the wastewater is treated.

The first two trains would be installed completely and take Love’s peak flow of 23,000 gallons per day. The third train would serve as a backup if they needed more capacity in the future.

Huismann said that 23,000 gallons per day is about 1,000 gallons of treated water per hour that would be discharged into the river.

However, Wendling later pointed out that they would be relying on an electronic mechanism, and they would essentially be gambling with county residents’ health.

“When are we going to start taking the priority of protecting our most precious resource, and that’s our people? The way you protect them is you take care of their health, and through clean water, and not jeopardizing that clean water,” Wendling said. “What’s the guarantee that there won’t be an issue? It’s a mechanical device that can fail at any moment.”

JPWB General Manager Brian Seppie said that despite Love’s assurance that they would monitor the water quality weekly and would send reports to the board, putting additional nutrients in the river still presents risk.

“Additional nutrient loading in the river is tough to quantify… the challenging part of that is what does Mother Nature do to us?,” Seppie said. “The releases from Fontenelle continue to decline, the water warms up, that water is then more subject to algae and moss. That same water is what we pull into our reservoir.”

He said it’s a snowball effect in which when water flows are already low, putting more nutrients into the water source will only worsen current issues of algae blooms.

Bingham noted earlier that Love’s will be required to tie in to the new sewer line once it is completed. This means that the proposed sewage system is a temporary solution until that sewer line is done.

Seppie questioned whether Love’s had done the math to see if the temporary fix was a more cost-effective system rather than helping push along the sewer line and ultimately tying into that.

“In regards to that effluent quality, that’s all we can really ask because they have a discharge permit from the state. We just want to ensure that it is complied to, continually monitored, and maintained,” added Seppie. “Then obviously once the collection system is installed that they be required to hook in. And all I’m suggesting is that it’s a finite amount of time and they have a large investment to make. Is there a better way to use those dollars.”

Every resident attending today’s meeting spoke in opposition to the proposed CUP. A primary concern was Love’s track record after its first system failed. Residents felt that approving the CUP would be putting the river and themselves at risk.

Green River resident Ted Barney compared the proposal to an issue that occurred at Camp Lejeune. Water was contaminated and presented several health risks that resulted in a multi-billion dollar lawsuit. He said that the first system failed and he had concerns over whether this system would fail as well.

Barney noticed discrepancies and typos in the Apex Company presentation during the meeting that gave him concern over whether their proposed project was well thought out or rushed.

Philip Stanton noted that the residents wouldn’t know of an issue of contamination until well after it happened.

“As we already know the original design was approved by the DEQ and it failed… if you guys do approve this today, no one is going to know anything about that monitoring except for the DEQ and none of us would know anything about it until it has failed,” he said. “This permit would not supply adequate protections of the river and its downstream users. That’s kind of solely on your guys’ shoulders right now to stop it and not let them put that outflow into the river.”

Another Jamestown resident expressed concerns over how the nutrients being put into the river would affect his water well since his water source is upstream from the reservoir. Huismann later said that they have not reviewed the geology in the area, so he could not answer that today.

Desiree Gomez, Jamestown resident, said she had concerns when the first permit was approved because she has had her own septic issues in Jamestown. She said the issues with Love’s is not the Jamestown residents’ problem.

I feel that’s not a Jamestown problem, that’s a Love’s problem. We shouldn’t have to be having a meeting where our water quality is in question, where our wildlife is in question, and what’s going to happen if and when they have a fault in their system.

She said a CUP approval would not be a selling point for people to live in Jamestown.

Al Harris, resident and former member of the JPWB, said that the JPWB has the “simple mission” of making sure the county has reliable and safe water at all times.

“What I’m looking at today is a potential hazard to that reliability 24/7, four miles upstream from where I get my drinking water,” Harris said. “Again, I can’t address it scientifically, but in my head to have that discharge right above where I have my intake is disgusting.”

“I want you to really think, are you willing to put that kind of a risk factor in front of the drinking water of 45,000 people?” Harris added.

Commissioner Roy Lloyd said that while Love’s may have the monitoring, it may not be enough to reassure county residents that their water isn’t being contaminated.

“I think the concept of putting what could be effluent into the river is highly concerning to our citizens, especially the ones four miles above the drinking spot, the water reservoir,” Lloyd said. “There are practices and concepts you have in place but I don’t know if it’s enough to provide enough reassurance.”

He added the Specific Purpose Tax passage will provide funding for the Jamestown-Rio Vista sewer line and may be beneficial for Love’s to work with that project rather than putting their funds and time into a temporary system.

Commissioner Mary Thoman also said that this could be a prime time to work with the Jamestown-Rio Vista project and help “high speed” it. She made a motion for the Commission to postpone the decision until Love’s, Jamestown-Rio Vista, the Sweetwater County Land Use Department, and the JPWB could meet and discuss options. The motion then failed due to a lack of a second.

Lloyd then made a similar motion, but added that the discussion between the above mentioned groups take place within a month so the current Commission could vote on this issue. Thoman seconded the motion.

Wendling said that he was opposed to postponing the decision. He called the Specific Purpose Tax passing a “light at the end of the tunnel” and efforts should be directed towards getting the sewer line installed.

The issue is, are we going to protect our resources or are we going to take the risk and subject them to something that we could have prevented? There’s light at the end of the tunnel.

Chairman Jeff Smith said that all of the comments he had heard and received regarding this issue were in opposition. Therefore, he said he would have a hard time approving the CUP today.

When the vote came to postpone the decision until the four groups could discuss options, Wendling, Smith, and Lloyd voted against it, while Thoman voted for the postponement. Commissioner Lauren Schoenfled was absent from the meeting. No further motions were made and the proposal and request for a CUP failed.