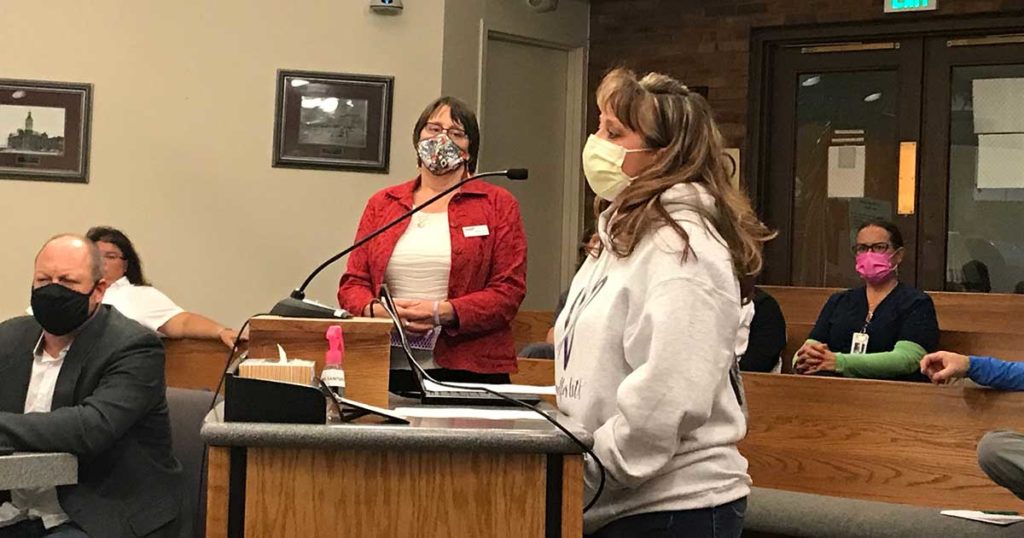 SWEETWATER COUNTY — October is Domestic Violence Awareness Month, and YWCA of Sweetwater County Center for Families and Children has been spreading the word across the county in a public awareness campaign.

Taneesa Congdon, director of the YWCA Center for Families and Children, said that the YWCA of Sweetwater County provided 13,000 services for victims of domestic violence in 2019.

Early on in the COVID-19 pandemic, Congdon reported that the YWCA was experiencing in increase in crisis calls, which she believed had to do with job loss or reduced hours resulting in victims being “trapped” within their homes with their perpetrators.

She said it is important to raise awareness to make people recognize domestic violence is an issue that exists in Sweetwater County, as well as show victims they have resources where they can seek help.

“We do this so the community knows that domestic violence does happen in our community. It happens behind closed doors, it’s often a hidden violence,” Congdon said. “But more importantly, we want to reach out to those who may be experiencing domestic violence.”

Statistically, 1 in 4 women and 1 in 7 men will experience domestic violence within their lifetime, according to Congdon.

The YWCA worked efficiently throughout the early months of the COVID-19 Coronavirus pandemic. They would could stay open and were available to provide aid and resources for victims of domestic violence.

“We’ve been here for victims, we want them to know that abuse is never their fault, and you’re not alone throughout this. Advocates are available 24/7,” she said.

Events for Awareness and Remembrance

Due to COVID-19, the YWCA’s annual candlelight vigil for victims of domestic violence is being adjusted to a drive-by vigil. On October 20 from 5:30 to 6:30, people can go to Bunning Park and drive through to remember the victims who lost their lives in Sweetwater County as result of domestic violence. There will be life-sized red silhouettes to honor each person.

On October 17, there will be the #StandForWhitt5k walk and run at the Park Hotel in honor of Rock Springs woman, Whitney Sewell, who lost her life in December 2019 as a result of domestic violence. The walk and run will take place at noon and food will be served afterwards.