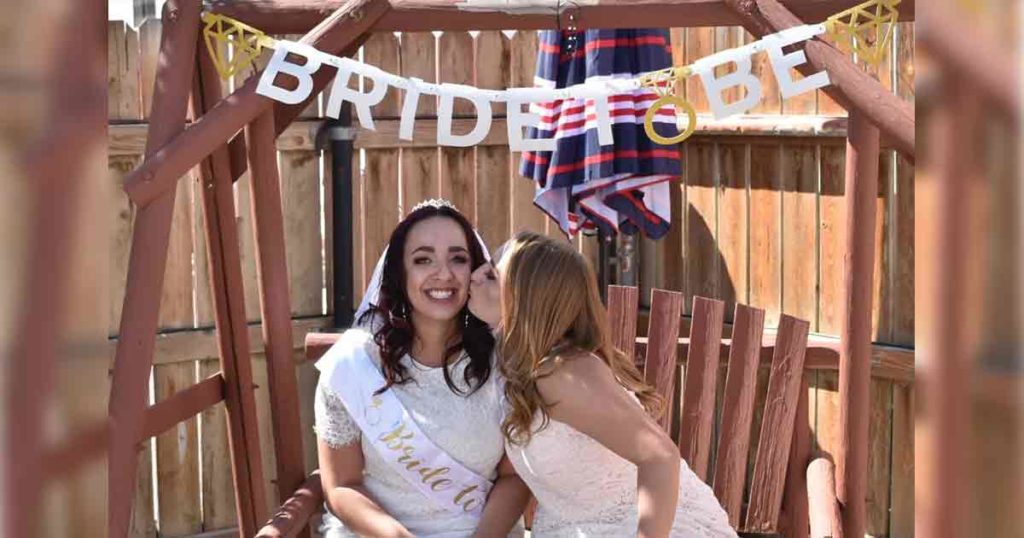 Whitney Sewell receives a kiss on the cheek from her sister, Kailey. Whitney died tragically on December 16, 2019, from a gunshot wound as a result of homicide. | Courtesy photo

Coping with the loss of a loved one is difficult, but what makes it even harder is when a young person’s life is cut too short.

Neither Whitney or Hunter appeared to have a history of violence, which left both families wondering “what happened?”

According to Whitney’s mother, Nicole Halstead, the police had never been called to the house before.

Whitney’s friend, Lindy Wardell, said she just assumed everything was fine because Whitney never had any signs of physical abuse.

After Whitney passed away, the family was left with so many questions. They started digging deeper into the relationship to find out what may have led to such a tragic end.

Family and friends looked back and started scrutinizing every detail. Wardell came to the conclusion that domestic abuse isn’t just about someone showing up with bruises and black eyes, it’s about trying to control someone, and verbal and emotional abuse.

“It was all hid behind the door,” Halstead said about the emotional abuse and controlling behavior.

This is why Whitney’s family wants to raise awareness about the what a troubled relationship can look like. To help before it’s too late.

“I raised a very independent, strong woman. And I think I forgot to let her know it’s okay to say things aren’t right and that maybe I can’t fix everything,” Halstead said.

She believes Whitney didn’t ask for help because she truly believed things would get better and she would be able to fix things.

“Whitney was one of the strongest, most confident people I know,” Wardell said.

Whitney was very goal-oriented and when she had her mind set on something, she was going to do it, Halstead said. Not only did she have weekly, monthly and yearly goals, but she also had five-year goals as well.

She was also good at making sure everyone got along together and that no one was left out.

Wardell said she brought her into the family too. Whitney loved to be the center of attention and liked to be the life of the party. She was a good student in high school, and lettered in cheerleading and band. She was also a big history buff.

However, what Whitney was most known for by her family, was her party-planning skills.

In fact, she was intending on opening her own party-planning business. From birthdays and gender reveals to Christmas and other holidays, Whitney loved to plan every, single detail to make sure the day was special. She was in the process of planning Christmas for her family and work family.

“That’s why this has been such a shock for all of us,” Halstead said. “Many days I still live in denial because I keep thinking she’s going to walk through the door.”

While working at a local restaurant, Whitney was seen as a dedicated worker and she worked her way through the business from bartending and catering to eventually landing a management job. She also helped with big events the restaurant hosted.

“We’ll always get through it,” Wardell said Whitney would say.

No matter how difficult the situation was, Whitney always found a way to “fix” things, both Halstead and Wardell said.

They believe Whitney’s situation was unique because not only was she married, but she worked with her husband all day. They had the same friends and Whitney may not have felt that she could talk to any of her friends about what was going on because it would get back to her husband.

“She had a fear of upsetting the whole norm of mutual friends,” Halstead said.

Halstead feels Whitney didn’t say anything to the family because she didn’t want to admit there was a situation she couldn’t handle. Both Halstead and Wardell also feel Whitney just didn’t know where to go for help.

“I think one of the biggest problems in this community too is we just don’t have resources,” Halstead said. “Because of the taboo stuff, it’s not talked about.”

Some signs they noticed afterward was how Whitney and Hunter had begun to distance themselves from their friends. They just stopped hanging out with certain friends and distanced themselves from family.

They also noticed impulsive behavior from Hunter, such as closing savings accounts, withdrawing money from the bank, and withdrawing an offer on the house he and Whitney were going to purchase.

Something else they noticed afterward was Whitney was selective with what she told her friends and family members. She would only tell certain family members and friends certain things.

“I think she was so confident “‘I can fix this. I can handle it,'” Wardell said.

She just didn’t want to express how bad things were. She thought she could handle it and fix it.

Wardell and Halstead also noticed changes in Whitney’s behavior. She was overly emotional over small things and she would often make up excuses for absences.

“There was a lot of isolation towards the end there. Even with me. She didn’t come around as much,” Halstead said.

Halstead said she just thought Whitney and her husband were growing apart and moving in different directions and it might end in a divorce, but she never had any idea something bigger than that would happen.

Both Halstead and Wardell want to raise awareness of what different kinds of domestic abuse look like.

“My goal through all of this is I want people to know that you can say ‘no.’ That you can say there is a point and time when you’ve had enough and that your worth is way more than staying in something,” Halstead said.

“It’s not just physical and you don’t have to stick around,” Wardell said. “It’s okay to leave if they treat you that way.”

They both want to start a community conversation and share information. They don’t want to forget Whitney and believe this is good way to honor her memory by raising awareness.

“If anything good is to come out of this it’s to help someone have the voice that they never thought they would have,” Nicole said.

The family has started a StandForWhitt Foundation and they are going to host a #StandForWhitt5k walk and run on October 17 at the Park Hotel. The run will take place at noon and food will be served after the run. Those who purchase t-shirts ahead of time can pick them up at 10:30 am.

Along with the race, a silent auction and 50/50 raffle will take place.

“The foundation will not keep anything,” Halstead said.

Anyone who has suffered from domestic violence is encouraged to participate. All of the funds raised through this event will go to the YWCA Crisis Center. Domestic violence and resource information will also be available at the race.

So far, more than 460 people have registered for the event.

You can learn more about the event here and we encourage you to stand up for the cause.