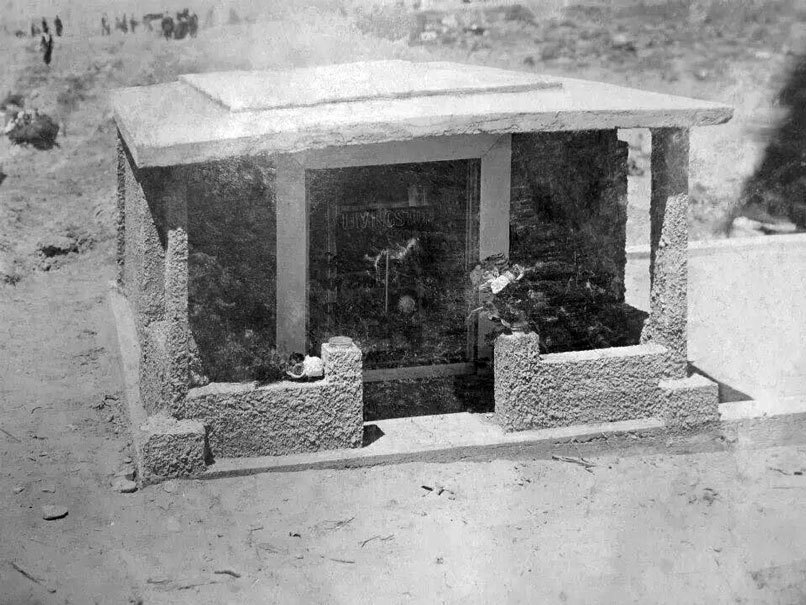 In 1921, a boy aged 15 months and his sister, not quite seven years old, died and were buried in the Rock Springs cemetery. Over the decades, other children viewed the toys left at the burial site and later on, weeded and raked it, and adults put flowers there, but the site deteriorated and was partially covered in sand and dirt. The site became known as “The Dollhouse” because of the dolls placed there by persons unknown. Now Wendie West, a Rock Springs native who was one of the youngsters who cleaned the site as a child, is leading an effort to restore the tomb marker to its past dignity.

ROCK SPRINGS — In 1921, a boy aged 15 months and his sister, not quite seven years old, died and were buried in the Rock Springs cemetery. Over the decades, other children viewed the toys left at the burial site and later on, weeded and raked it, and adults put flowers there, but the site deteriorated and was partially covered in sand and dirt. The site became known as “The Dollhouse” because of the dolls placed there by persons unknown. Now Wendie West, a Rock Springs native who was one of the youngsters who cleaned the site as a child, is leading an effort to restore the tomb marker to its past dignity.

The boy buried there is Henry Wayne Livingston. He was born April 23, 1920 and died Sept. 10, 1921, West said. Also buried in the tomb is Georgia Rozena Livingston, who was born Nov. 25, 1914 and died Oct. 20, 1921, a month after her brother passed on. The children were the son and daughter of Henry and Linda Livingston, who lived in Dines, a coal camp around here.

“We think Henry did construction work for his livelihood. But we do not know for sure,” she said.

West said that back then, such childhood deaths were common.

“There was a diphtheria epidemic in 1921 and it took a lot of young lives,” West said. “The death record says she died of diphtheria, and he died of spinal meningitis. But my guess is they probably died of the same thing, whichever it was, because it was only days apart.”

West is heading up a project to improve the grave site and restore it to its original appearance. The original was beautifully done and even elegant.

“I found out about it by looking on Facebook. Barbara Bertagnolli had written a book entitled “Years Ago, Scenes and Stories from Rock Springs, Wyoming,” and in it was a piece on “the Dollhouse”—that is, this tomb marker. The book came up on the Facebook page “How Well Do You Know Rock Springs,” West explained.

She said she and some friends discussed the Facebook page and in particular the Bertagnolli book. Some of those Facebook friends are Rock Springs residents while others are no longer in this city or state, but retain an interest in it. Bertagnolli, West added, lives in Maryland, but will be back here in May.

“She’s the one who really started this, she planted the seed.”

West said, “I was talking on Facebook with these people and I started looking for a picture of the grave site from 1921. I went to the funeral homes, the museum, the Rocket, up at the Casper Star because there was a lady there who wrote an article about the Dollhouse, and I thought maybe they have a better picture up there. But I was getting nowhere.”

Then, West said, she called Vases Funeral Home a second time, and they said to call Angela Cable, who does a lot of research.

“I called her and gave her the info and she had a living heir within days that I could talk to,” West recalled. “Cable is amazing—she went through Ancestry.com and Findagrave, and she located Sheila Livingston, who lives in Nampa, Idaho and is the niece of Henry Wayne and Georgia. Shelia had just located this grave about three years ago, and she and a friend put a plaque on the front. (See photo.) Until then I did not know what the name was on the plot.”

West said the plot was unnamed, and when she was a little girl, the front area was open, had a glass window, and lace curtains, which nobody maintained. She recalled getting down on her hands and knees to look inside at the toys the father had placed in there.

“I was not the only one; there were a lot of us that grew up here and we would weed—there was no grass there—we would weed and rake regularly for your own family members, and when over there we would put flowers there on Memorial Day. We’d weed it and clean it up other times, and other people would do the same thing,” West said. “The site had a draw for a lot of us.”

She recalled that many of her contemporaries had heard different stories about the site.

West said, “I thought it was one little girl. My mom said it was a little girl who was passing through town with her parents and died. But a gal who works at the bank had heard a little girl died in a fire. Somebody else thought it was two girls. So we never really knew until just recently that it actually is a boy and a girl. But we had this kind of kinship with them. I think the key was we had family in the cemetery and so we went there. As kids that was something you did; pull weeds, rake, clean things up—and at that time I just had a grandmother in there. Now my parents and grandpa are in there too.”

West said she is asking people for donations for this project. She has set up a bank account at RSNB Bank, at POB 880, Rock Springs, Wyo. 82902. The account name is Dollhouse Restoration. She said people who want to help the project can call her at 362-8760.

The purpose of the project is to restore the tomb marker and get it back, as close as possible, to how it looked originally, based on a photo Sheila Livingston found among her grandparents things.

“We got written legal permission from Sheila to do this restoration. You can’t just go and do that on your own,” West said.

The restored tomb marker will probably be higher than the current undistinguished marker by about eight inches but will keep the existing length and width.

She said, “We can’t do a bigger footprint than what is there. Much of the lowest 8 inches, approximately, is now covered by blown dirt and sand, and grass, and we will raise it up above the soil surface. We’ll tear down what’s there now, it’s too damaged by vandals and time—vandals broke in there and stole the toys in the 1970s or 1980s. It sat there for many years before anybody broke in—during my time nobody did anything but look at it. For those ten years to the sixties nothing like that happened, and probably not for another decade after that.”

She said, “We’ll rebuild the grave site—the Dollhouse—it’s not a tomb, this is a decoration for their grave. They are underground, underneath it. This is a decorative marker. It’s one of a kind. It will have a small forward set little porch, bounded by concrete at the front.”

She said she’ll include new versions of the lace curtains and glass window, but may put a bronze marker over the glass. “Originally I was going to have it exactly the way it was but my better judgment tells me to protect it –that is, with the bronze marker attached to the frame.”

“I think there will be a whole lot of people that want to help.” It could cost around $6,000, she added.

“I am hoping many others have known this place since childhood and didn’t even know the family name but stopped by and placed flowers there. Many of us have cared about this little place for most of our lives and have shared memories.”