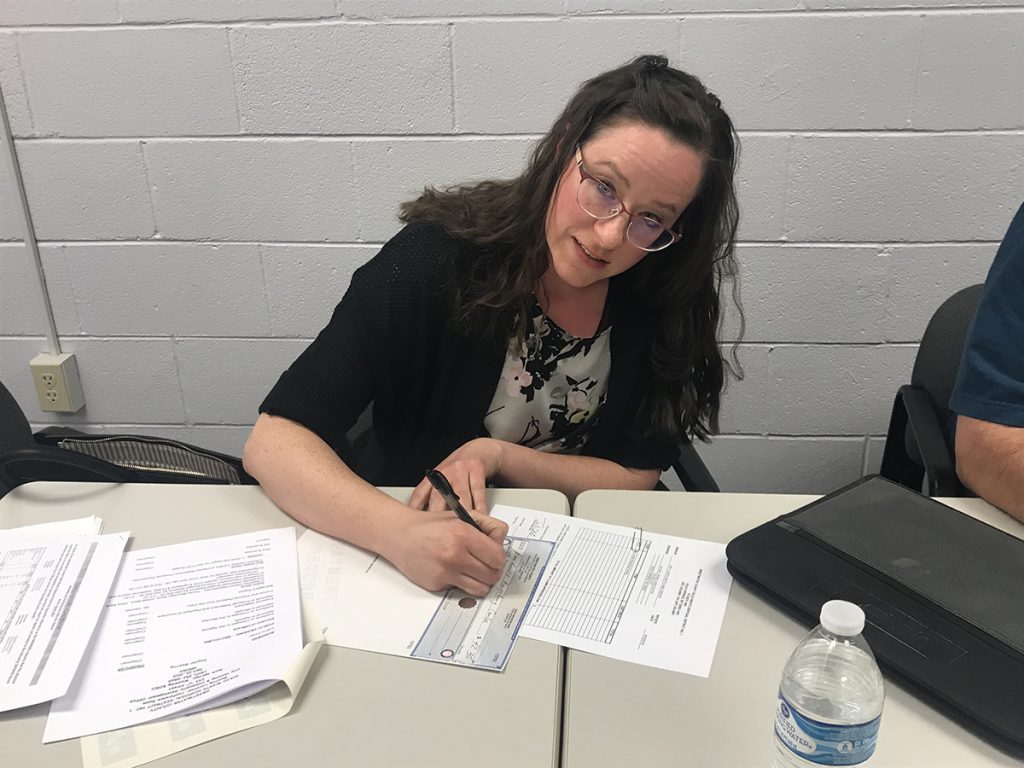 Solid Waste District Board Member Virginia Bodyfelt fills out the check that will fund the Ray Lovato Recycling Center for two more months.

ROCK SPRINGS — After several heated exchanges about lack of communication and email address disclosure, the Sweetwater County Solid Waste District #1 Board approved a motion to fund the Ray Lovato Recycling Center for the remainder of the 2018-2019 fiscal year tonight.

Residents filled the meeting room and hallway of the Rock Springs Housing Authority building as Recycling Board President Devon Brubaker addressed the board about several topics.

One major concern of the recycling board is the perception that the center needs to constantly ask the district for more money.

“Our standard request for funding has been there since January of 2018,” Brubaker told the board.” We shouldn’t have to come to every (SWD) meeting and beg for funding.”

Board member Virginia Bodyfelt said it is not in the district’s by-laws to fund the recycling center. She said it is something the district chooses to do, “but you come in here with a somewhat entitled mentality and we’ve been a little concerned about the lack of communication and lack of attendance at our meetings.”

“From now on we will be at every one of your board meetings and we’ll get down on our hands and knees and grovel for the money if that’s what we need to do,” Brubaker said.

Brubaker continued that he has answered dozens of emails from the district since becoming president, but he doesn’t received the same type of courtesy.

Bodyfelt said the district has asked Brubaker for certain KPI (key performance indicators) reports and she said that Brubaker told the board, “verbatim you did not feel those numbers were helpful for our taxpayers and you did not need to include them in your report.”

Brubaker said the district provided the recycling board with a PDF file for those reports that were very difficult to fill in. When he received permission to move the data to an Excel spreadsheet, he was able to provide the district with 12 months worth of reports rather than one report at a time.

Furthermore, he said he’s provided every piece of data, responded to every email and been completely transparent about the recycling center situation.

Bodyfelt told Brubaker it would be more appropriate to have these discussions during a regular public board meeting to which Brubaker responded “if you felt that way you should have told us that.”

Brubaker added that if it was a personality issue he would resign his post today if it meant the recycling center would receive its funding.

Following a special April 11 meeting, emails to SWD board members began to escalate and, “there are some board members here that are frustrated and probably a little scared that people are contacting them personally,” said board member Tim Sheehan.

He questioned how residents were able to obtain their personal emails. Brubaker said there was a checklist of things people can do to help the recycling center and one of them was to contact the SWD board about their concerns. He said those were the emails provided to the recycling center, and wasn’t sure how they got on the list.

“You didn’t go to the high school and give our email addresses out?” Bodyfelt asked Brubaker. He said he made several presentations at the high school, but didn’t give out any district emails.

Following the discussion and a cordial agreement to improve communication efforts on both sides, the board cast its vote to release the remainder of its funding for the center.

Brubaker added that he would eventually like to see regionalized recycling to include as many towns and as many solid waste districts as possible. Everyone agreed the district and recycling boards need to set their sights on the future and stop arguing about the past.