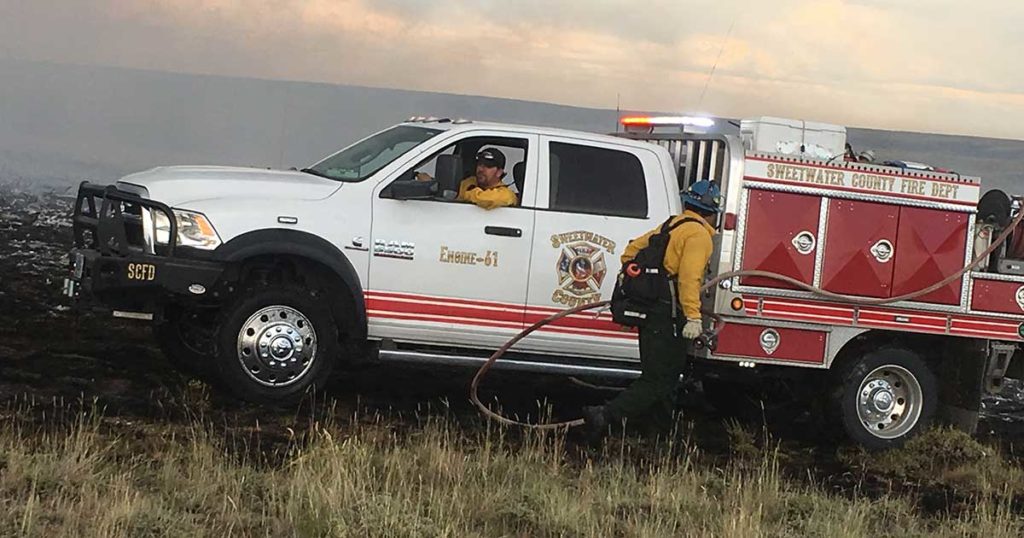 The contracts with GRFD and Fire District #1 will be about $450,000 annually, according to Commissioner Mary Thoman. A contract will also need to be established with the Wamsutter Volunteer Fire Department, but those costs have not been discussed or decided yet. In contrast, the Sweetwater County Fire Department operates with a $700,000 budget, though they have brought back about $100,000 in revenue annually over the past few years.

This decision came to be through multiple meetings with a fire committee that was formed to conduct a study of the local fire agencies in an attempt to maximize efficiencies and reduce redundancies in firefighting efforts in Sweetwater County. The committee consisted of Commissioners Mary Thoman and Roy Lloyd; John DeLeon, Deputy County Attorney; Gene Legerski, Public Works Director; Garry McLean, Human Resources Director; and Mike Bournazian, County Fire Warden.

The committee came up with three options, and then a fourth was presented by Bournazian on March 1 during the Commission meeting. The options were as follows:

Commissioner Thoman said she wanted to clarify to county residents that county fire services are not being eliminated, but rather are being reorganized and the way in which services are offered will change.

In no way is county fire going to be eliminated, reduced. If anything it will be enhanced.

The meeting started off with 11 emails and letters from community members and the Rock Springs Grazing Association all expressing their opposition to eliminating the county fire department. There was also one call that Thoman received from Jacob Ribordy, Assistant Fire Chief at Sweetwater County Fire District #1, supporting the decision to move forward with contract work.

Commissioner Thoman also said she spoke with Melissa Towers, Acting District Manager for the BLM’s High Desert District, and Towers said the report the committee put together was “comprehensive” and “thorough”. According to Thoman, Towers said contracting with GRFD and Fire District #1 “seems appropriate”.

Additionally, Commissioner Thoman talked to Scott Kitchner, Fire Chief at Sweetwater County Fire District #1. He said that Fire District #1 already protects hundreds if not thousands of acres of Rock Springs Grazing Association land, and there has never been an issue with their service in the 30 years he has worked there.

“Fire protection services will still be provided to all the lands and citizens within Sweetwater County. It will just be provided by two different, larger agencies,” Kitchner told Thoman. “Fire District #1 and Green River Fire Department are more than capable of providing the services needed in a timely, safe, responsible and professional fashion, while working hand in hand with the BLM and other federal partners.”

Reasons for going with Option 3 included the fact that GRFD and Fire District #1 are trained in rescue and EMS services, whereas the county fire department does not provide EMS services, Thoman said.

Additionally, volunteer departments such as GRFD need a certain volume of calls to maintain certification and continue providing services. GRFD said they would not be able to sustain the department based on the number of calls within Green River alone. Instead, they need to respond to calls west of Green River. However, GRFD said they cannot continue to provide services west of Green River without compensation from the county.

This [Option 3] invests in the development of the cities, towns, and districts, versus creating another entity.

Commissioner Wendling argued that it is not the county’s job to ensure the cities and districts can continue to provide services.

“I think our job is to provide in those unincorporated areas, as well as work closely with the federal government, to continue to provide wildfire service in those areas,” Wendling said.

He went on to say that the county should be working toward a unified county-wide fire service. Commissioner Schoenfeld said she believes this is the first step toward that result.

“I think this is a good step in beginning to look at what county-wide services can look like and how we can work together, but it is going to take a few years to work through that,” she said.

Wendling also said he was voting against Option 3 because the county fire department offers a lot of humanitarian work for communities such as Wamsutter and Granger, and because he worries contract work will end up costing more and more each year.

He said he spoke to former County Fire Warden Dennis Washam on Monday night, and Washam warned him of contract work. Wendling said Washam was hired in 1990 and he worked to get the county out of contract work at that time due to the costs continually going up.

“[Washam] said the reason those prices went up and down was purely because government agencies did not like the commission. We as a commission are going to make some decisions that are going to upset some people, if we haven’t already, and ultimately we’re going to pay the price for it,” Wendling said.

Commissioner Wendling also pointed out that Wamsutter will have to be included, and that the county does not know what funding they will need to provide these services. He added that even Farson could come and ask the county for compensation for the services they provide in that area of the county.

I truly believe there are some unintended consequences in this move that we have not prepared ourselves for.

Commissioner Lloyd said this issue was never about cost for him, but rather about the scope of services the fire agencies can provide. He said he understands that the county fire department is a great wildfire department, however GRFD has already been providing services west of Green River for decades and they have more structural training and provide EMS services.

He said he believed Option 2 was the best option, which is the hybrid option, but that since it wasn’t on the table he would support Option 3. Wendling said he would support Option 2 as he believed it would be a good step toward unification. Wendling added that he was disappointed with how the fire committee had presented its findings, stating that it did not provide equal consideration to each option.

“The hybrid model is closer to being ready to primetime than the model we have a motion on,” Wendling said, favoring Option 2 over Option 3.

With the 4-1 decision, the county will rely on contracting fire services for this upcoming fire season.

In executive session, the Commission made the decision to send a Memorandum of Understanding to GRFD and Fire District #1 for them to consider. They will also send them to the Granger and Wamsutter fire departments for informational purposes.