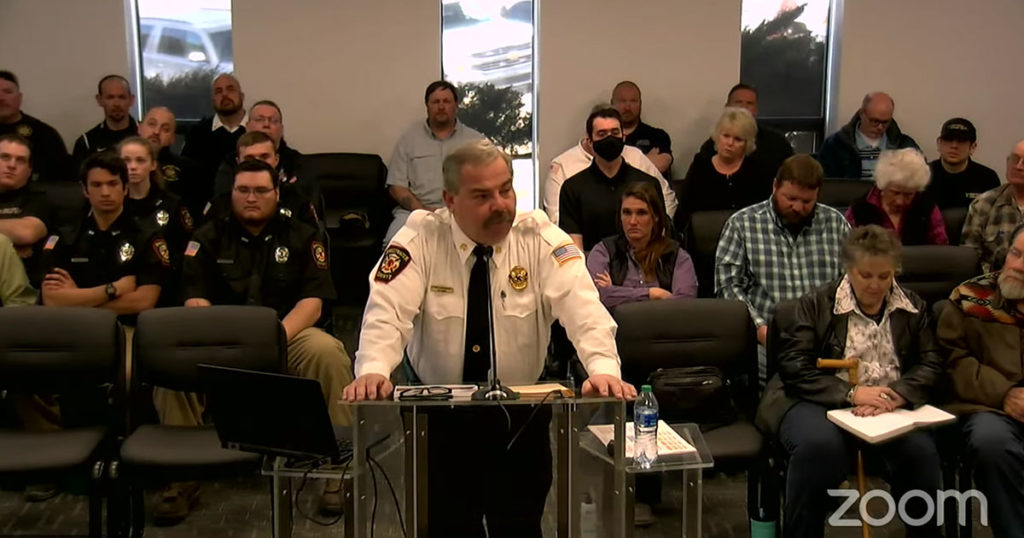 It was a full house at the Sweetwater County Commission meeting Tuesday as County Fire Warden Mike Bournazian and residents discussed fire protection services with the board. Zoom photo

SWEETWATER COUNTY — The decision on whether to dismantle or keep the Sweetwater County Fire Department has been postponed until March 15 following several resident comments and the proposal of another option.

The committee stated that, “The Board of County Commissioners continues to face budget challenges and, as such, is continuing to seek opportunities and efficiencies to save money while providing necessary services.”

Concerns and conflicts the board was presented with and reviewed included, jurisdiction on fires throughout the county, overlapping service areas, duplication of personnel and equipment on fires, incident command conflicts, communication conflicts with dispatch, and inefficiencies.

With their findings, they proposed three options for moving forward with firefighting services outside of the incorporated cities, towns, and districts.

Those options are as follows:

While Option 1 makes it so no contractual work will take place, Option 3 would shut down the Sweetwater County Fire Department and would rely solely on contractual work. Following a dozen meetings since December 2021, the committee recommended Option 3 to the Commission.

Commissioner Lloyd explained that the committee was recommending Option 3 because it “maximizes efficiency in the county of staff, overhead, and equipment.”

The recommendation also states Option 3 saves the county $12 million because the fire department needs a new building to fit all of their equipment and serve their needs. However, Commissioner Randy “Doc” Wendling said that plans for a $12 million building were scrapped after the reserves took a dip due to the COVID-19 pandemic. Instead, he said residents have pointed toward existing buildings in the county that could fit the needs of the fire department.

“That’s kind of an inflated figure because I don’t think it will be that much,” Wendling said.

The recommendation goes onto state that Option 3 “recognizes and funds existing fire service efforts in the county, establishing the actual costs of these services.” Additionally, the existing fire service providers, specifically the Green River Fire Department (GRFD) and Sweetwater County Fire District #1, are well equipped and trained in rescue and EMS services.

Due to all of this, Commissioners Thoman and Lloyd argued that contracting with GRFD and Fire District #1 for a combined cost of approximately $400,000 a year would be an “enhancement” of services at a lower cost. However, the Wamsutter Volunteer Fire Department would also need to be contracted to cover the rest of the county’s unincorporated lands, which could be an additional $20,000 or more.

The approximated $200,000 for Fire District #1 would allow the district to provide services to the unincorporated areas of the county, as well as hire seasonal staff for the four months of “fire season”. Commissioner Wendling and Chairman Jeff Smith raised concerns that more often, fire seasons are lasting longer than four months.

Fire District #1 Chief Scott Kitchner said that though they would hire seasonal staff for four months because that is the busiest time for fire season, his district is prepared year-round.

“We don’t have a season. We have to be prepared 365 days of the year… we’re ready to go all year,” Chief Kitchner said.

“Dollars Ahead of People”

McCollum added that no one can predict how big a fire is going to be, and therefore contractual work can bring about issues.

Anytime you put a price tag on public safety, you’re going to have problems.

Other Granger residents worried about response times and availability of firefighters to respond without the county fire department’s support.

Wendling said the county should be discussing a unified fire district.

“If we start this with fire, we may be able to start moving it into a district for ambulance. We have an opportunity here,” he said.

Commissioner Wendling and Chairman Smith also expressed concerns over growing costs of contracts. Meanwhile, the county fire department has brought back $100,000 of revenue for the past few years due to reimbursements for assisting on fires outside of the county or state.

“It has been a tough road with our ambulance and the escalating cost there. This year, county fire has reduced their cost by $100,000. I’m not sure we’ll ever be able to get that with anybody we contract with,” Smith said.

Commissioner Thoman pointed out that they would be working with other local government agencies rather than a private company, which should make the contracts more manageable.

“We’d be working with local governmental agencies, not a for-profit private company as the ambulance was. There’s a bit of a difference, and I don’t think our local government partners have asked for a profit margin,” Thoman said.

Both Smith and Wendling said that was a good point, however, Wendling still sees it as a risk to give up county control to contract work.

“Once you let someone’s hand in your checkbook, instead of using two fingers, they start using three. And pretty soon it’s a whole hand, and we no longer control it as a commission for our taxpayers,” Wendling said.

In an attempt to maximize efficiencies without shutting down the county fire department, Sweetwater County Fire Warden Mike Bournazian presented an additional option to the Commission. Bournazian would like to see the county enter a Memorandum of Understanding with Granger and Wamsutter’s fire departments and unify the three departments into one.

Bournazian said this would reduce the amount of equipment and the duplication of services.

“This would unify these resources, this would bolster the services being provided in our two furthest locations. County fire would downsize its equipment and response here locally, and would move that equipment out to Wamsutter and Granger,” he said.

Additionally, he said it would enhance these departments’ personnel and response because they could have additional staff in those areas. Since both Wamsutter and Granger are volunteer departments, a lot of the firefighters are working all day and cannot respond all the time.

“We’re already doing this in concept… 72 percent of the fires that we respond to are not on the interstate but 28 percent are. The I-80 corridor is huge. We would improve our response time. We would not need to go into contracts with two, three other entities,” Bournazian said.

“If we go contract, we’re doing away with the one department that covers the greatest amount of area in this county,” he added.

The Commission voted 3-1, with Thoman being the vote against, to have the committee vet this option and come back on March 15 at the next Commission meeting to vote on how to move forward given the four options. Commissioner Lauren Schoenfeld was absent from the meeting.

The entire Sweetwater County Fire Committee’s report can be found in the Commission’s meeting packet, staring on page 103.

Highway Patrol Aims to Crack Down on Impaired Driving Through August