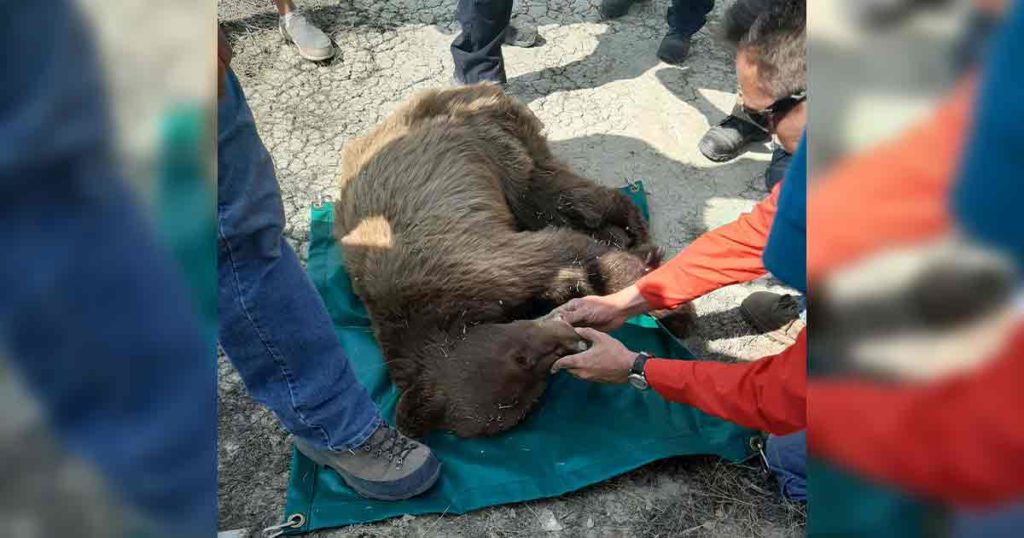 ROCK SPRINGS — An adult female black bear, in emaciated condition, was captured and later euthanized after it was spotted west of Rock Springs Tuesday around noon.

The bear was first seen near Clear View acres, which is near the base of White Mountain. According to a press release from the Wyoming Game and Fish Department, on September 15 they responded to a black bear report on the West side of Rock Springs.

“We’re not sure where the bear came from,” Rock Springs Wyoming Game and Fish Game Warden Andy Roosa, said.

“The adult female black bear was old and in extremely poor body condition,” the release states. “While it is unknown whether the bear received any food rewards, it likely wandered into town looking for easy sources of food.”

Roosa said the bear was first reportedly seen near Cruel Jacks along Interstate 80. He said it isn’t uncommon for Wyoming Game and Fish to get reports of wildlife, such as bears, being in locations which aren’t their normal habitat. However, more often than not, those turn out to be a misidentification of an animal.

On Tuesday, that wasn’t the case. It was an actual black bear in Rock Springs.

“We were surprised. That’s the first I’ve ever heard of a bear in Rock Springs.”

Once it was confirmed to be a bear, Wyoming Game and Fish was contacted immediately.

“We’re usually the only ones that have the tool for the job,” Roosa said.

The tools Roosa was referring too were a bear trap and tranquilizer darts and dart guns. They used the tranquilizers to knock the bear out so they can safely put the bear into the trap.

Unfortunately, after capturing the bear, Wyoming Game and Fish personal noticed the bear was in terrible condition.

“Given the bear’s age, emaciated condition and the time of the year, it is highly unlikely that it would survive the winter. The bear’s behavior around humans also indicated a very high likelihood of future conflict potential,” the press release states. “Based on those factors, it was decided that the ethical and humane action was to euthanize the bear.”

Even though this was the first bear to find its way to Rock Springs, this isn’t the first bear to be tranquilized and moved to another location. Roosa said a bear was discovered in a tree in Green River in 2014.

Roosa was involved in the tranquilizing and capture of that bear too. Since the bear was in the tree, the Green River Fire Department assisted in the call.

“We were pretty surprised by that one too,” Roosa said.

Other than Little Mountain and Pine Mountain, Sweetwater County just doesn’t have what is considered typical bear habitat, he said.