Then [Jesus] said to them, “Oh, how foolish you are, and how slow of heart to believe all that the prophets have declared! Was it not necessary that the Messiah should suffer these things and then enter into his glory?” Then beginning with Moses and all the prophets, he interpreted to them the things about himself in all the scriptures.

Grace to you and peace from God our Father and the Lord Jesus Christ. In this passage above Jesus is talking about his death and resurrection. And where does he point us to learn about this? To Moses and all the prophets. In other words, he is speaking about what we as Christians call the Old Testament. It is indeed controversial that he would say that. Some would even call him anti-Semitic for suggesting so. After all, Christians are not the only ones who use this scripture for their religion, but Jewish people use them too, except they call it the Hebrew Bible.

And because there are still people who bear the name of Jewish today it is assumed that the Old Testament, or the Hebrew Bible, is more rightfully theirs. And thus, Christians should not even touch them! If a Christian these days claims anything about Jesus in the Old Testament they are sometimes accused of “appropriation.” To be clear, such accusations come from a very small amount of people. Most people of religious faith, whether Jewish or Christian, are of sound mind on this. Nevertheless, there are a small minority of Christians (yes, even Christians), Jews, people of other faiths, and people of no faith, who are incensed about this issue.

Let’s consider a few things. There is a history of Christian anti-Semitism that has done horrid things to Jewish people. That should definitely be noted and rebuked and never repeated. Lest some people from any side get a bit too zealous, it should be observed that Jesus Christ was born a Jew. Those of Christian religion do worship a Jewish man. One thing helpful in this conversation is what I picked up from the theologian Sarah Hinlicky Wilson. She informs us that during the time that Jesus walked the earth the main religious activity was what some scholars call “Second Temple Judaism.” Of course, there were many strains of Judaism.

In its earliest moments, Christianity itself was merely a sect among others within Jewish religion. It did not become distinctly not Judaism for even a century or two after Jesus died. Also, note this, it was in year 70 CE that the temple was destroyed in Jerusalem which put an end to Second Temple Judaism. Over time, two major religions rose out of its dust. Rabbinic Judaism and catholic Christianity. With these dynamics in mind, and with a charitable and friendly spirit, both groups can lay equal claim to the same religious books. That is, what is known as the Hebrew Bible to contemporary Jews; and, what is known as the Old Testament to contemporary Christians.

At the end of the day, Judaism and Christianity are now two different religions. Though they share some scriptures in common, it is no surprise they are going to interpret those same scriptures in very different ways. So, we should respect and honor one another even as we disagree. What I can say from a Christian perspective is this, Jesus pointed to himself—to his death and resurrection—in Moses and the prophets. And I trust him in that.

This gospel of Jesus Christ does not coerce, manipulate, or practice violence in word or deed. No human power should be used to strongarm anyone about it. Instead, it is by the power of the external Word that one can believe anything about Jesus. We use the Scriptures, whether Old or New Testament to proclaim God’s graciousness in Christ. And so, I am bidden to speak: Jesus died and rose again in accordance with the scriptures to raise you to new life. Your sins are forgiven. 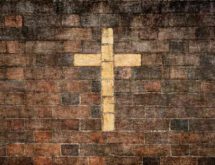