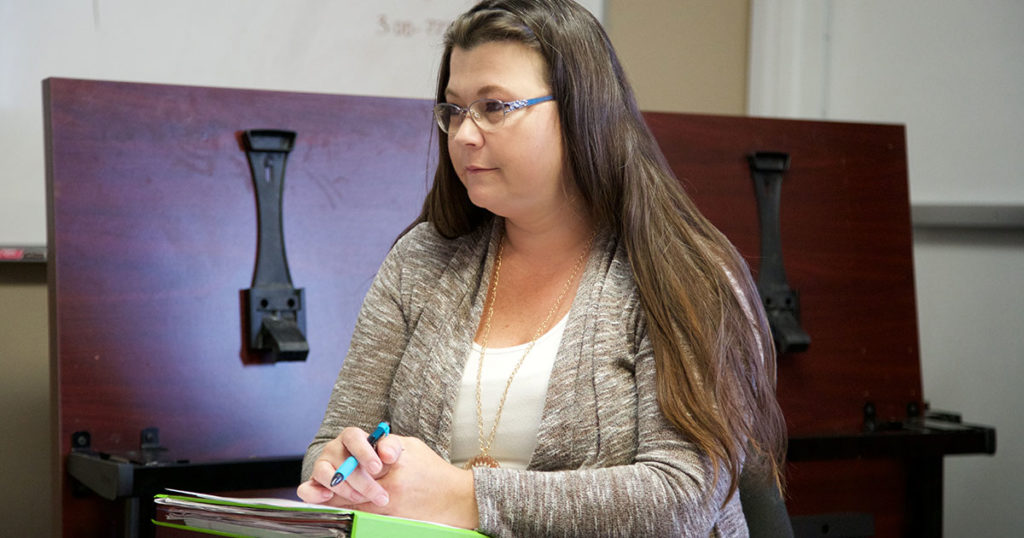 SWEETWATER COUNTY — Jackie Brough graduated from Climb Wyoming after completing the office careers training a few years ago, and since then she has been working as a teller at Commerce Bank of Wyoming in Rock Springs.

Brough credits Climb with empowering her and giving her the skills to be able to advance her career to a job that not only allows her to support her family, but a job she really loves. Now, Climb Wyoming in Sweetwater County is offering that office careers training once again for other low income single mothers in the community.

“We offer a variety of different kinds of programs, and they’re always focused on where the jobs are in this community,” said Climb Wyoming Sweetwater County Program Director Katie Mullen.

The Rocky Mountain Power Foundation has been a longstanding donor to Climb, consistently giving grants to fund the trainings. Mullen said Rocky Mountain Power has been a funder since 2009, and have consistently given the Sweetwater site around $5,000 per grant. This most recent grant, which is funding the office careers training, is the largest one to date with $6,500.

“We’re committed to the health and vitality and vibrancy of our communities through continued involvement and investment. One way we do that is through our foundation grants that support across four key areas, including safety and wellness. And this program through Climb Wyoming really works tirelessly to develop programming that we think elevates the community, so this is really one of our core priorities.” Brandon Zero, Communication Specialist with Pacific Power said.

Mullen added that local Rocky Mountain Power employees also have donated their time to Climb, such as with helping with mock interviews for the women enrolled to practice.

“We’re just happy to make an impact anywhere we can, and I think Climb Wyoming is obviously doing that, and we’re happy to support that,” Zero said.

As Mullen has been looking at workforce needs in the community, she has been noticing a lot of office jobs available. This is what encouraged Climb to bring this training back at this time. When someone enrolls in Climb, Mullen said they have a lot of conversation about what that individual’s strengths are and what empowers them.

“Some people love people and want to be in front of people,” Mullen said. “Sometimes those are the people who are a great match for office careers.”

“Even if they don’t know it,” Brough added.

Brough shared her personal experience with Climb to attest to the success of this program in her own life.

Before Brough enrolled in Climb, she said she lived “day to day,” as she worked a part time retail job. With four kids, it was difficult to find the stability she desired in a part time position.

“I’m a single mom, raising my kids, just trying to make ends meet. I was in low income housing, I was getting food stamps and all that stuff from the state,” Brough said.

Enrolling in Climb was the first step for Brough towards find her voice and becoming happier. She had looked into Climb before, but she never believed she could do the trainings.

Giving it a try was the best decision Brough could have made for herself as she has seen a massive change in her life since completing the training.

Before Climb, it was just paycheck to paycheck, and you just don’t have vacations, it’s just the same thing all the time. Now, it’s amazing.

Climb helped Brough attain the skills needed for an office career such as phone etiquette, typing, working with software like Word and Excel, resume building, and even parenting and budgeting classes. However, Climb also helped her to work through her shyness and become more confident. She explained that part of the program includes group and one-on-one therapy, which she found to be very valuable.

“That helps you tremendously. At first I thought I wasn’t going to like it, but it was great. The girls are great, they are there for you 24/7,” Brough said.

The therapy sessions and working with the women as a group helped her to realize that it’s ok to speak up and advocate for herself.

“Before I was very shy, they couldn’t even hear me. We went through the therapy and everyone just helped me to figure out who I was and that it’s ok to speak up. It’s not just that I was shy and quiet, but I was afraid to talk to people and have certain conversations,” Brough said.

Through therapy and working with the Climb staff, Brough said she was able to find her voice. Not only did Climb help give her the skills to find a job, but they also helped her learn how to say no to job offers that she didn’t feel were right for her.

“I didn’t know how to say no, so they helped me with that too. And they put me in a job that I’m still at, and it’s amazing,” she said. “Where I’m working now at the bank, you have to be vocal.”

While her days can get hectic and busy, she said it’s important for her to be a happy face for people to talk to, and a friendly voice on the phone. However, she said she finds it to be quite easy to be smiling and happy because she feels that way inside.

“Even if you’re frustrated, you’re happy. Like I said, I’m happy with my job,” Brough said.

Brough described Climb as much more than a training. She’s made friends and found a support system throughout the program. Doing group therapy with the other women in the program has given Brough lifelong friends.

“I’m still friends with every single one of them,” she said. “It’s a bunch of strangers coming together at different ages, different diversities, everything, and you have a bond that’s forever. It’s not just a training, it turns into family.”

Mullen said there are two big components of Climb. One is the industry training, but then there’s another aspect which is known as ‘Tuesday Climb Days’. This is where the women go through everything from interview skills, learning how to fill out job applications, to budgeting and doing therapy.

The whole program is built around support. People can come to this program as they are and not be judged, and work on what they want to work on, and get a job placement at the end of it.

Brough pointed out that the support doesn’t end once you complete the program either.

“Three years later they’re still here for me, if I just need to talk or anything,” Brough said.

While all the trainings Climb offers places women in jobs successfully, Mullen said she’s noticed a particular longevity with the office career graduates.

Brough said she believes this is because once you get that skill set, you’re good to go no matter where you are. She describes herself as “a lifer” at her job at the bank because of the happiness it brings her. She decided to invest in herself when she enrolled in Climb, and now she encourages her children to always try as well.

About the Climb Office Careers Training

Climb Wyoming is offering office careers training for Sweetwater-area single moms intent on creating a better future for their kids. The training are beginning this month and will last through December.

As of November 2021 at the Sweetwater site, Climb has served 253 mothers and 517 children locally. According to statistics from Climb, 94 percent of single mothers who enter a Climb program successfully graduate. Furthermore, the percentage of employed women goes from 47.11 percent to 76.81 percent following their completion of the program.

Climb Wyoming has been serving women and their children for 35 years, and they have six sites across the state. In Sweetwater County, Climb offers two trainings a year in which 10 to 12 women enroll per training.

There will be an information meeting Thursday, August 18, at 6 p.m. regarding the office careers training. Women who are interested in enrolling can attend the meeting which will be held at the Climb Wyoming building at 404 N Street in Rock Springs. If you cannot make the meeting, you can text or call Katie Mullen at 307-922-7033.