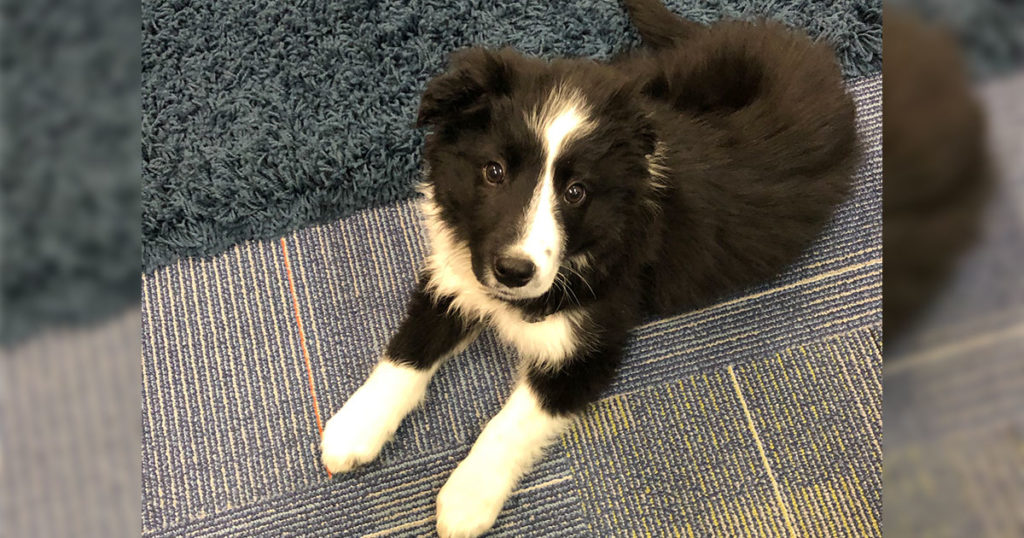 Obie is a four-month old Border Collie who is spending his days at Expedition Academy High School to help improve mental and emotional health of students. Photo courtesy of Ralph Obray

GREEN RIVER — Expedition Academy High School (EAHS) has brought in a furry friend to accompany students to their classes as part of a pilot dog program.

The dog has been in the school for about nine weeks now, but EAHS just received unanimous approval from the Sweetwater County School District No. 2 Board of Trustees to keep the dog in the school through the remainder of the school year.

Ralph Obray, EAHS Principal, said the dog’s purpose in the school is to help calm students, promote a positive atmosphere, and better the students’ mental and emotional health.

Obie, a four-month old Border Collie, is already beloved by the EAHS students and staff.

“He’s made a dramatic impact already in our student attendance and behaviors. Especially with our students who have high anxiety and high emotional needs,” Obray said.

He added that there are multiple studies that show dogs in the classroom provide both physical and emotional health benefits for students. Having a dog present promotes a positive mood and decreases stress. Obray said the simple act of petting a dog can lower blood pressure and heart rate.

Three students wrote letters in support of having Obie in the school, stating that he has helped with their mental health, has made them more excited to come to school, and has been a much needed friend on rough days.

Obray said the EAHS staff has wanted to bring in a dog for about five years now, but they couldn’t find someone on staff who wanted to take on the responsibility for owning and caring for the dog outside of school hours. Now that they have that figured out, Obray said they would like the dog to be a “permanent fixture” of the school.

The school board unanimously approved for the dog to stay in the school through the remainder of the year, and then they will reconsider during the summer whether or not to continue the program for the next year.

Chairman Steve Core said that before considering approving the program longterm, he would like to see some liability built in.

“I mean if the dog bites somebody, what happens?” Core asked.

Jason Fuss, Human Resource Director and Assistant Superintendent will be working on ensuring the district has that liability.