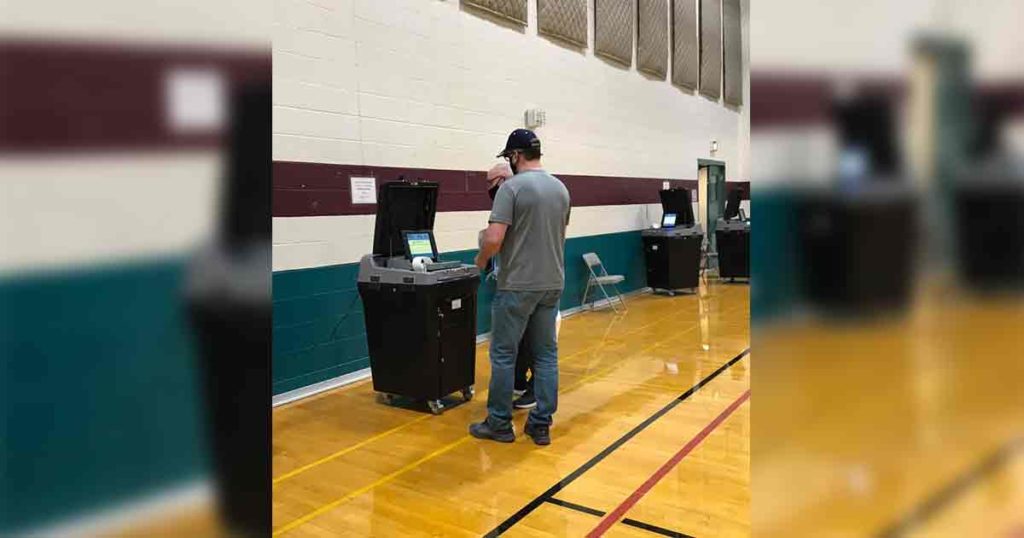 During the 2020 Primary Election, new voting machines were used. Photo by Stephanie Thompson

GREEN RIVER — It’s been over two weeks since the Primary Election took place and according to County Clerk Cindy Lane, the Sweetwater County Elections Office is using it as a learning experience.

Lane said this year’s election was a little different than in years past due to new voting machines.

Lane explained that the Wyoming Secretary of State’s Office wanted all counties to have the same election machines and provided all of the counties with DS200 election systems, to protection election results from being tampered with. The reason for the change is the old machines would send election information through phones lines, which Lane explains has been found to be less secure or more prone to attack.

After using the new machines for the first time, Lane says she was impressed.

“The equipment is really good. It ran flawlessly.”

She said the new machines take a picture of each ballot as it goes through the machine and records that information. It also can also sort through write-in votes and create a report with all of that information. All of this information is then stored onto a USB drive.

While the new system ran flawlessly and the results are pretty accurate, there is one problem: how long it takes to get all of the information off of the USB drives to the Sweetwater County Courthouse.

Lane said since the information is stored on a USB drive, those drives need to be picked from each polling location and delivered to the Courthouse. During the Primary Election, the Sweetwater County Sheriff’s Office helped carry out this important task.

Once the USBs arrive to the courthouse, the information is entered into a secure computer, which isn’t plugged into anything, for calculation of those results. This takes some time, since results from Farson, Granger, Wamsutter, and Bairoil are driven in.

“People are going to have to be patient in that,” Lane said.

Due to the new process, it’s going to take longer for unofficial results to come in, she said.

Lane and her staff have some time before the General Election to come up with ideas on how to get those results out quicker.

[In SweetwaterNOW’s experience of covering the election from the courthouse, in 2016 the election results started coming in right after the 7 pm close of the polls. Results showed up on a screen that were able to verify to the public in real-time. Final, unofficial results were in by no later than 8:30 pm. In the 2020 primary election, first results did not start coming in until after 8:49 pm – 2 hours after polls closing. The unofficial results were received closer to 10:30 pm.]

This year, 7,900 registered voters participated in the Primary Election, which is up slightly from the 2018 Primary Election where 7,879 residents voted. However, how residents voted changed quite a bit. This year, 3,428 voted through absentee ballot, which is up substantially from 2018 where 913 voted through absentee ballots.

During the Primary Election, absentee ballots were ran through a machine at the County Clerk’s Office by election judges on election day. Lane said the county was given permission to run absentee ballots through earlier if it wanted to, but chose to wait until election day. She said they did open all of the ballots and prepared them for running through the machine earlier though.

Absentee ballots will be mailed out on September 18 for registered voters who requested an absentee ballot for the 2020 General Election. A dropbox for early absentee voting will be at the Sweetwater County Courthouse in Green River or ballots can be mailed in.

A few weeks prior to the General Election, residents can also take advantage of the early absentee voting center at the Courthouse. Lane said residents can come in, fill out a ballot and slide it into the voting machine. All of the results are stored in this machine until the “close poll button” is pushed.