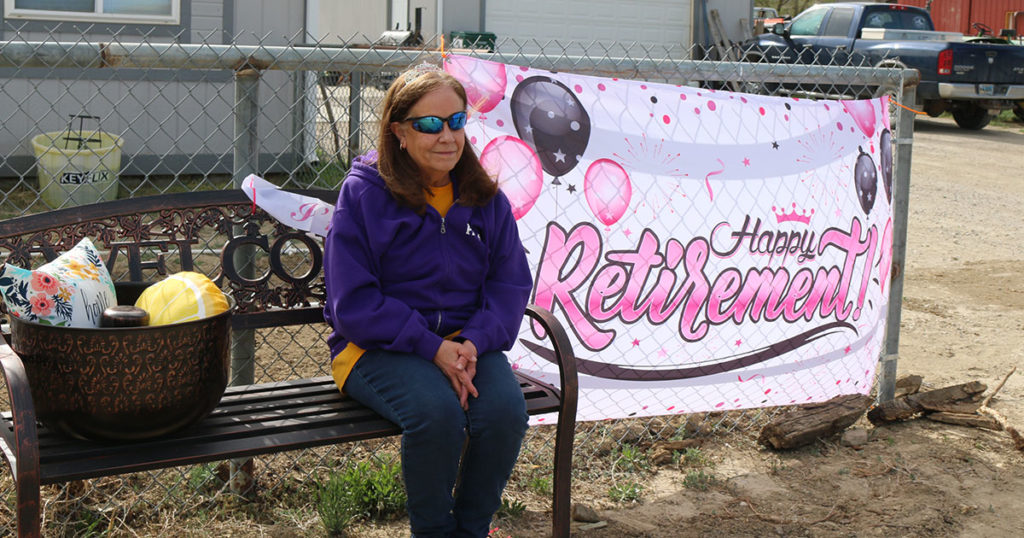 Walnut Elementary School newly retired secretary Peggy Little was surprised with a car parade on May 20. Photo by Stephanie Thompson

For someone who is used to helping everyone else, Peggy Little was surprised to see others going out of their way to thank her.

After 37 years with Sweetwater County School District No. 1, Little decided to retire, which left the Walnut Elementary School employees and students wondering what they were going to do without her.

Little said she spent her entire 37-year career with District No. 1 at Walnut Elementary as its secretary.

“She’s the glue that holds the school together,” office paraprofessional Jenny Hale said. “We always say ‘Peggy runs the school’.”

Hale, who has worked with Little for the past 14 years, said Little is always going out of her way to help everyone in the school from students and staff to the principal and parents.

And it doesn’t stop there. Whenever anyone new is hired on in a secretary’s position within the district, Little is looked at as a great mentor and is happy to help new employees any way she can.

When Little isn’t busy with the day-to-day duties, she’s making sure students and teachers have everything they need. If that means putting a bandage on a child’s scratch when the nurse is gone, she’ll do it.

Our school is so well run and I know it has a lot to do with her.

Hale, who was recently hired to take over Little’s position, was trying to learn as much as she could from Little before she retired. However, she feels no one will ever replace Little. She had so much experience and it’s hard to see her retire.

Little has already offered to come back to the school and help out when they need her, so that should help ease their minds, but they will still miss seeing her on a day-to-day basis.

“I’ve gone through second generations of families,” Little said. “And I have worked with some awesome teachers.”

The Parent Teacher Organization told Little they were going to be stopping by on Wednesday evening on May 20, with dinner to help celebrate her retirement and to take a photo of her by a bench and retirement sign they placed in her yard.

What they failed to tell Little, was they invited the entire school for a retirement car parade and asked the students to paint rocks for Little to make a rock garden with.

Hale said they wanted to do something special for Little that would last a long time. Little didn’t finish landscaping and they thought she could use the rocks for a rock garden.

At around 5 pm, May 20, the PTO flawlessly executed its plan. While a couple of the PTO members asked Little to come outside, Hale organized the parade in a parking lot close to Little’s home.

In fact, the PTO noticed they could see the cars decorated with balloons and car chalk from Little’s yard, so they distracted her by asking about her horse.

It was a good distraction, but Little knew the PTO was up to something and continued to ask them what they were going to do to her. She also told them she knew she couldn’t trust them.

It was at about this time that the car parade, led by a Rock Springs Police Department car, made its grand entrance. Little was shocked, surprised, and overcome with emotions all at the same time.

She started to cry, as car after car pulled up and children handed her painted rocks for her rock garden.

The parade lasted about 15 minutes as each student, teacher, and the principal stopped to wish Little a happy retirement.

By the time the parade was over, the bin used to hold the rocks were overflowing, which left everyone wondering who was going to carry it.

Not only did Little receive painted rocks, but her favorite snacks, flowers, and a wreath.

After the parade was over, PTO members joked with Little about it not being that bad.

“It was absolutely awesome,” Little said.