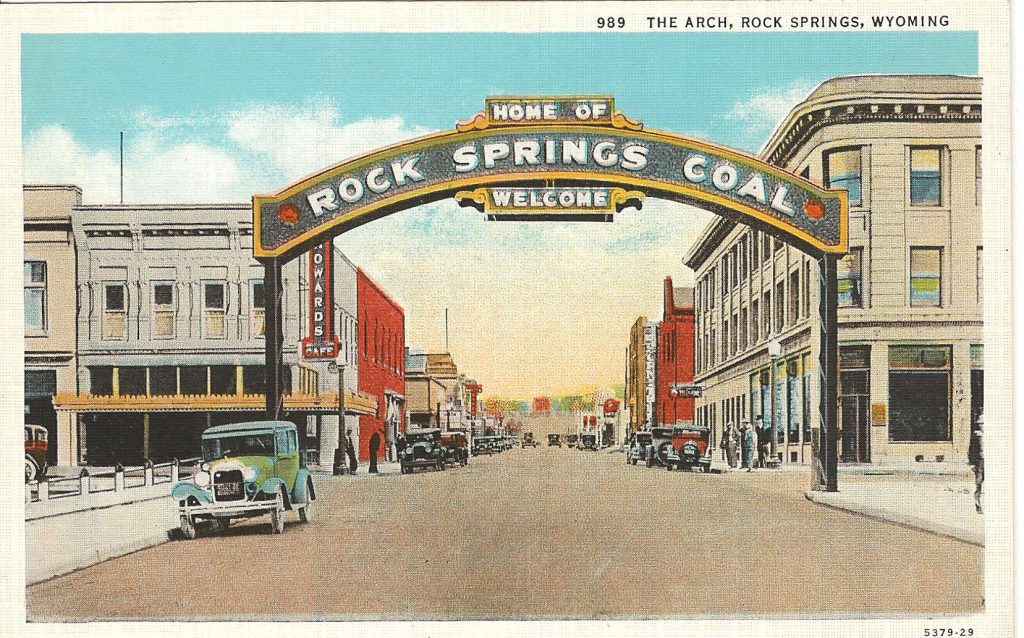 You might pass by it from time to time while visiting a Downtown business, or like us, daily on our way to work. It is just as ingrained into the image of Downtown Rock Springs as Bunning Park, the Rock Springs Historical Museum (formerly the fire station), the freight station, the train depot, and many other memory-laden locations. That is the Rock Springs Coal arch in Railroad Park

What Stories Would the Coal Arch Tell?

It was the beginning of June 1929 when the Rock Springs Coal sign was first lit, and in that year it was considered real big doings around these parts. In that buzz, it was like the 20th century was starting to come of age.

Now, coming upon 90 years of age and counting, if that sign could talk, what stories would it tell?

The Coal Sign has shone through the end of the Roaring 20s, the Great Depression, the end of Prohibition, World War II, the Cold War, moon landings, the start of the Information age in the 1990s, the 9-11-2001 terrorist attacks, and the 100th anniversary of the end of World War I in 2018.

The article said the sign was meant to draw attention to Rock Springs coal at a time of increasing competition from other coal sources. A June 14, 1929 Rocket article pegged the actual installation cost at $3,000. (Articles courtesy of the Rock Springs Museum)

A Community’s Identity Tied in a Simple Neon Sign

On that long-ago day when the Coal Sign was first lighted, it was meant to not only welcome travelers to Rock Springs, but at the same time, tell visitors a little bit about the city. A recent article by Luke Benson in the Alliance for Historic Wyoming website at www.historicwyoming.org sums it up well:

“The Rock Springs Coal sign was originally constructed in 1929 by the Wyoming Coal Operators. The welcome sign arched over the Lincoln Highway to greet travelers as they came through town. When the highway was widened, the sign was removed and later restored and placed in its current location near the railroad tracks that divide downtown Rock Springs into two distinct sections.

“The Rock Springs Coal sign is an iconic landmark in the city. The sign’s reference to coal mining, its original placement on the Lincoln Highway, and its current location overlooking the railroad tracks ties together to embody much of the city’s identity in one simple neon sign.”

The article is taken from the Historical Marker Project website at www.historicalmarkerproject.com:

“On June 6, 1929, the Rock Springs Coal ‘Welcome’ sign was lit. The Union Pacific Coal Company Employees’ Magazine reported it spanned the Lincoln Highway and was approximately 100 feet from the main line of the Union Pacific Railroad. It was reportedly the largest, arch neon sign erected in the Rocky Mountain West and ‘afforded convenient visibility from the passenger and Pullman car windows.’ It was the first sign erected to advertise the product of an industry—COAL—upon which the citizens depended for their livelihood.”

This is Part 1 of a four-part series on the history and evolution of the historical Rock Springs Coal Sign, with historic photos courtesy of Rock Springs Historical Museum. Articles quoted courtesy of Dick Blust, Sweetwater County Museum Assistant. Keep your eye out for the next installments.

Part 2: A Monument of Civic Pride: The History of the Rock Springs Coal Arch