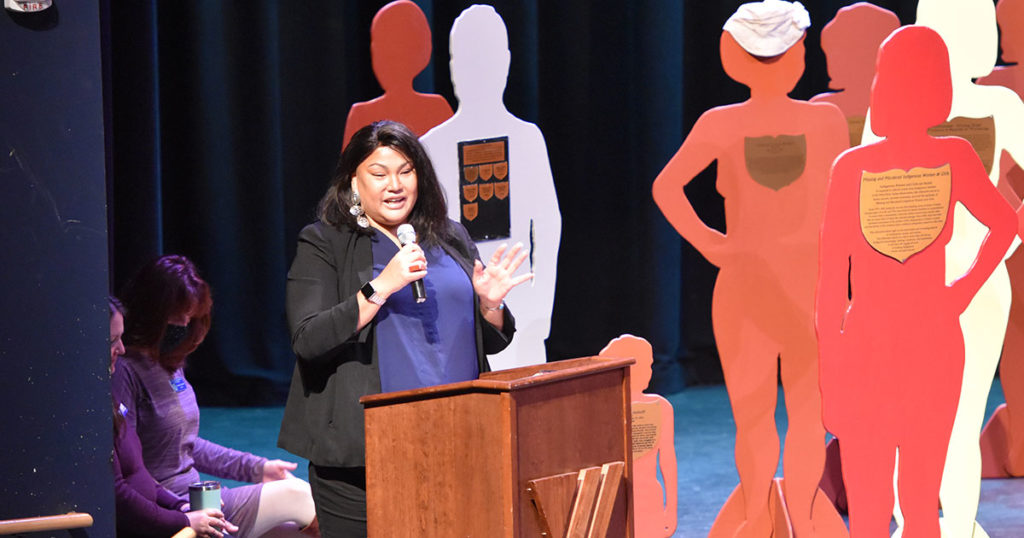 ROCK SPRINGS — The Wyoming State Silent Witness Memorial took place in Rock Springs on Saturday, in which Lynnette Grey Bull, founder of Not Our Native Daughters, spoke about the need to work together to protect Indigenous women and girls from domestic violence.

However, Grey Bull pointed out that Native American women suffer domestic violence at a rate of 50 times higher than the national average.

I stand before you, a full-blooded Native American woman, but the statistics that hang over my head and my daughters’ heads, and all the Indigenous women and girls’ heads, is that I am the most stalked, raped, sexually assaulted, and murdered than any other ethnicity in this country.

“I’ve probably said that over a hundred times, but it hurts me deep down every time I have to say that. Because it shouldn’t be a reality. And I work very hard to change those statistics,” Grey Bull said.

The Wyoming Governor’s Task Force for Missing & Murdered Indigenous Persons, which was developed upon Grey Bull’s request, released a report in January 2021. The report revealed that Indigenous homicide victims were 21 percent of the total homicide victims in Wyoming between 2000 and 2020.

The report also found that articles for Indigenous homicide victims were more likely to portray the victim negatively and provide less information than articles about White homicide victims.

The statistics show that domestic violence, specifically, has deeply impacted Native American communities, and Indigenous women and girls suffer from domestic violence at a disproportionate rate.

Of the suspects in Indigenous female homicide cases, 94 percent were current or former intimate partners of the female victim.

Setting out to change these statistics, Grey Bull said she has dedicated her life to these issues and she will continue spending her life seeking justice and protection for Indigenous people. She said she points out the statistics to bring about collaboration and change.

“I point these out never to elicit any shame or guilt or who’s fault is it, I always like to point these out so that we can work together to change them,” Grey Bull said. “I’m a dreamer, I’m optimistic, I believe in collaboration.”

Grey Bull herself has been a victim of domestic violence, and she cites that as one of the reasons she became involved in her line of work. She reflected on her past abuse, which she said was the first time she had shared the story in a long time.

After being abandoned by her family at the age of 17, she found herself in a toxic and abusive relationship.

“I thought abuse was love,” she said.

After being beaten, humiliated, terrified, and facing two near-death experiences with the same man, she realized the importance of breaking the cycle of intergenerational trauma and other trauma.

“I look back at the broken Lynnette, the one who just wanted someone to love her and took all kinds of toxicity and brokenness to fill that emptiness I had at that younger age, and I could have easily been one of them,” she said, pointing at the Silent Witnesses silhouettes.

I could easily had no life to serve.

Grey Bull found healing and strength through God and her church, and that led her down the path of wanting to help other women and girls who find themselves in the same pattern of trauma bonding and abuse.

“Once I found out how much God loved me… I became fearless. Nothing intimidates me. I fight fearlessly for women and children because I’ve been in those situations. I know how hard it is to feel the utmost rejection, the utmost abandonment from family, and then have to go through hell with toxic relationships over and over and over again,” Grey Bull said.

“I believe in building capacity. I build on building bridges where bridges have not been built before. I really do believe that is the essence of change and I work tirelessly, and a lot of others too,” Grey Bull said. “I would be a fool to think we can do this alone. I know for certain we cannot do this alone.”

For more information on Grey Bull’s work and Not Our Native Daughters, visit their website.