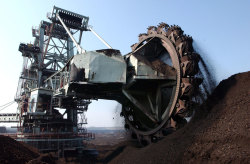 TAIYUAN, CHINA —After a week of U.S. headlines simultaneously announcing declarations of war on coal and announcing a bold new beginning to addressing climate change, a delegation of Wyoming policymakers headed to coal producing regions of China. Their goal: to strengthen old international partnerships and build new ones centered on advancing technologies that reduce coal’s environmental footprint.

Also joining the delegation is Zunsheng “John” Jiao, chief geologist of the University of Wyoming’s Carbon Management Institute; Mark Newcomb, board of directors for the Jackson Hole Center for Global Affairs; Matthew Targett, vice president of research and development for LP Amina; Shi Zhenchun, president of Peabody China; David Wendt, president of the Jackson Hole Center for Global Affairs (JHCGA), and Olivia Meigs, director of communications for JHCGA — which organized this trip; and myself, WyoFile editor-in-chief.

This is my second energy/environment technology and policy tour in China. In 2009, I joined the “Sino-U.S. New Energy Sci-Tech Forum and Conference on Coal Mine Methane Recovery and Utilization”in Shanxi Province — also at the invitation of the JHCGA.
So why China, and why now? Because coal is responsible for nearly 40 percent of man-made CO2 emissions, and because experts project that the world will continue to rely on coal as an abundant and cheap source of power to drive emerging economies. It’s no secret that the U.S. and China lead the world in man-made CO2 emissions, and that any success in avoiding the worst-case climate change scenarios relies on both countries to lead the way in cutting carbon emissions from coal — and soon.

“It doesn’t matter what you think, if there’s anthropogenic — fill in the blank: climate change, global warming … Our markets change,” Lubnau told WyoFile earlier this month. “And if we want to continue utilizing coal we have to respond to the market.”

When Lubnau and the rest of the Wyoming delegation engaged in their first discussion of the week — with Shanxi Provincial Development and Reform Commission officials on the 8th floor of the Yingze Hotel — they learned that their Chinese counterparts are committed to cutting carbon from coal for much more than just coal market considerations.
Wu Dongsheng, director of Shanxi Provincial Development and Reform Commission’s Climate Change Division, said that coal’s role in climate change is a driving force for a host of policies and initiatives already enacted in Shanxi — a coal-rich province that plays the same role in China as Wyoming plays in the United States’ coal energy system. Speaking through an interpreter, Dongsheng said it is Shanxi’s coal riches that obligate the province to lead the drive in cutting carbon emissions from coal. He briefed the delegation on Shanxi’s “commitment to the world” to reduce its total carbon emissions by 40-45 percent of 2005 levels by 2020 — a goal that the government has already made big strides toward.

Dongsheng explained that the carbon reduction goal is complemented by a host of energy policies that will boost the province’s GDP rather than be a drag on the economy, such as replacing antiquated industrial facilities with the newest energy-efficient designs, and deliberately bringing in new industries to shrink the provincial government’s reliance on coal-based revenues.

Dongsheng said the province is using the riches it’s reaped via its massive coal resource to build green energy initiatives.

Let me make clear that Shanxi officials didn’t ask about how Wyoming officials view climate change and man’s role in it. They did, however, enthusiastically offer to share their experiences in using a diverse set of policies and cooperative efforts to drive innovation in cleaning up coal. They are particularly interested in advancing carbon capture and sequestration (CCS) technology — something that U.S. coal mining and coal-reliant utilities have long despised as a federal regulatory approach at home.

Before Monday’s meeting with the Shanxi Provincial Development and Reform Commission, Rep. Mary Throne explained her frustration with the U.S. government’s current strategy to use regulation to drive CCS technology. “The Clean Air Act is not the right tool,” she said.
In the current U.S. environment of flush domestic natural gas supplies, according to Throne, President Obama’s plan to reduce power plant emissions 30 percent below 2005 levels by 2030 will simply drive utilities to shift to natural gas, leaving the drive for coal-based CCS innovation languishing. A better, more innovation-friendly approach, according to Throne, might have been the “Waxman-Markey”carbon cap-and-trade bill, which passed the U.S. House in 2009, but was never considered by the U.S. Senate.

“That’s one of my frustrations with Wyoming’s congressional delegation,”said Throne, an attorney intimately familiar with air quality laws and regulations. “As a Wyoming legislator, I don’t get to rewrite the Clean Air Act.” She added that EPA “stepped into the void because Congress didn’t act.”

The Wyoming delegation’s China summit itinerary continues on Tuesday with a discussion and tour of laboratories at the Shanxi Coal and Chemical Research Institute, Chinese Academy of Sciences, and a meeting with the Shanxi China Council for the Promotion of International Trade.

— Dustin Bleizeffer is WyoFile editor-in-chief. He has covered energy and natural resource issues in Wyoming for 15 years. You can reach him at (307) 267-3327 or email dustin@wyofile.com. Follow Dustin on Twitter at @DBleizeffer