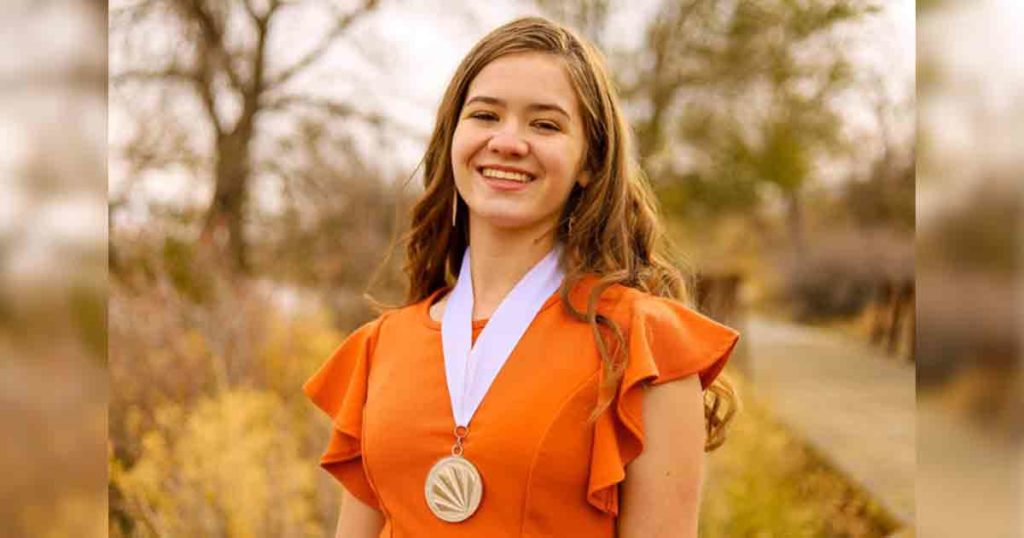 GREEN RIVER — Recent Green River High School graduate Emmalee Skinner knows competing in this year’s Distinguished Young Women Nationals competition may not look like what it usually does, but she’s still excited for the opportunity.

Over the course of the three nights, June 24-26, the program will award more than $130,000 in cash scholarships to participants, Principe said. The 50 state representatives will be completing all areas of competition safely from home and the broadcasts will be compiled from those virtual submissions.

During the 2021 competition, Skinner, and the other 49 competitors, will compete in the following categories: scholastics, interview, talent, fitness and self-expression. These submissions will be a combination of pre-recorded videos and live-recorded video conference calls.

Skinner said she found out about the program because her older sister had competed in it. At that time, it was known as the Junior Miss program, however the name later changed. All Skinner did was fill out an online application to start the process.

Skinner said she competed in the same categories that she will be competing in for nationals, which are scholastics, interview, talent, fitness and self-expression.

For her talent, Skinner chose dance, while for fitness she had to learn a choreographed routine given to her. Since these portions of the competition were virtual, Skinner recorded them. This had its advantages and disadvantages.

“I did numerous recordings,” Skinner said.

The talent portion went smoothly and she only made one recording, but her fitness routine, which was a lot like Zumba, took numerous recordings. Skinner said she finally just had to tell herself it was never going to be perfect and submit her best one.

During the interview portion of the competition, the judges have an opportunity to get to know each candidate and discover their unique personalities, she said.

As for self expression, each contestant is given a question ahead of time to answer. For the Wyoming competition, Skinner had 24 hours to research and answer her question. For nationals, she will only have two hours.

Under scholastics, the judges look at the competitor’s GPA and what activities they were involved in while in school.

Whoever has the highest score wins the title. In 2020 Wyoming competition, Skinner came out on top, but it was a close finish with one of the other six competitors. Both Skinner and the first runner up won four of the categories. Skinner won talent, fitness, self expression and scholastics. Each category is worth so many points. Due to the how the categories are weighted, Skinner took the Wyoming title and won a $3,600 scholarship.

For the national competition, Skinner has learned a new routine for the fitness portion of the competition. As for her talent, she only made a couple of slight adjustments to it.

Once again, Skinner is perfecting her recordings since nationals is later this week. Each day, she has to have something submitted. While Skinner understands why the competition has to take place virtually, she still knows it would be a different experience in person.

“It’s definitely been different,” Skinner said. “I wish it could be have been in person.”

However, there has been one benefit to the program taking place virtually. Skinner has already had the chance to meet most of the candidates from other states. iIn the past, this is something that would not have happened until the actual event. Skinner is enjoying making new friends and learning about their schools, the classes they take, and their home towns.

Skinner said she already knows how amazing people can be, but meeting some of the other ladies virtually has opened her eyes even more to just how incredible others truly are.

Be Your Best Self

Skinner said the program encourages its contestants to “Be Your Best Self” and explains how they can follow this program successfully.

The five elements of the program are:

“One thing I learned is there are so many little ways to be my best self,” Skinner said.

She said not only has this program helped her with her self confidence, it has helped her discover who she is as a person.

Skinner is encouraging any juniors to consider applying for the program. Not only will they learn a lot about themselves, but have a chance at winning college scholarships. Skinner will be attending University of Wyoming and hopes to pursue a career as a dental hygienist.

The national scholarship program will be streamed live for free at DYWNationalFinals.com at 7 p.m. June 24-26 CST for those who want to watch it.