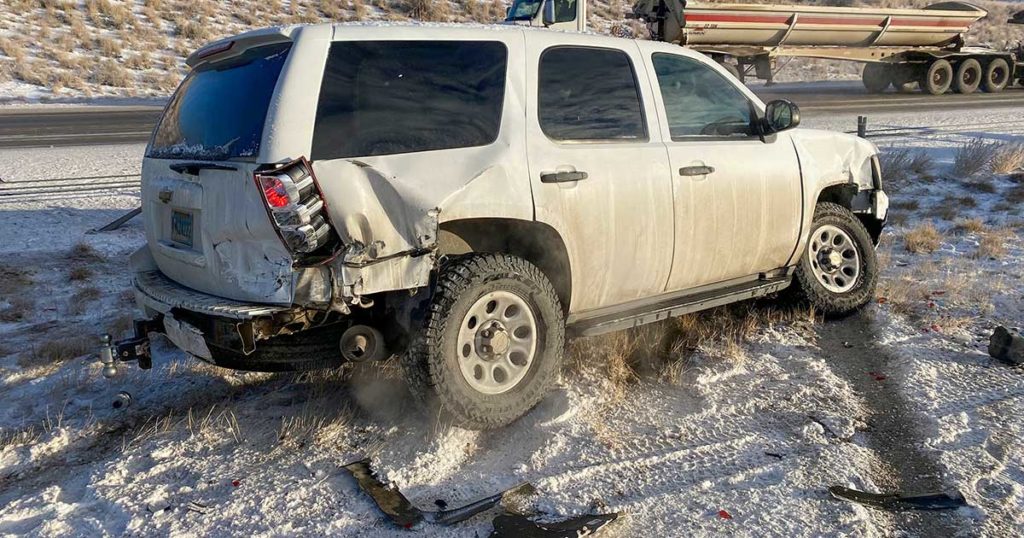 SWEETWATER COUNTY — A Sweetwater County sheriff deputy’s vehicle was hit today by a passing vehicle on the interstate while the deputy was investigating a separate crash.

At around 7:40 am, the deputy responded to a report of a single-vehicle crash located near mile marker 87 on Interstate 80 East.

On arrival, the deputy learned that the driver lost control of their vehicle on black ice, sliding off of the roadway into the median and colliding with the steel cable barrier.

By about 8:15 am, while tending to the crash, the deputy was parked in the median and seated in their sheriff’s vehicle with its red and blue emergency lights flashing when another driver passing by lost control of their vehicle and collided with the deputy’s vehicle.

It was estimated that the passing vehicle was traveling between 60 and 65 mph before the driver lost control and collided with the deputy’s vehicle. The driver was cited and released for speed too fast for conditions. The deputy was treated and released by the hospital, sustaining only minor injuries and now recovering at home.

“It never fails. When winter conditions hit, it always takes folks some time to adjust their driving behaviors,” said sheriff’s office spokesperson Jason Mower. “We’re very lucky. This could have been much worse. We want everyone to make it home safe for the holidays, so please pay attention, buckle up, take it slow and be careful out there.”