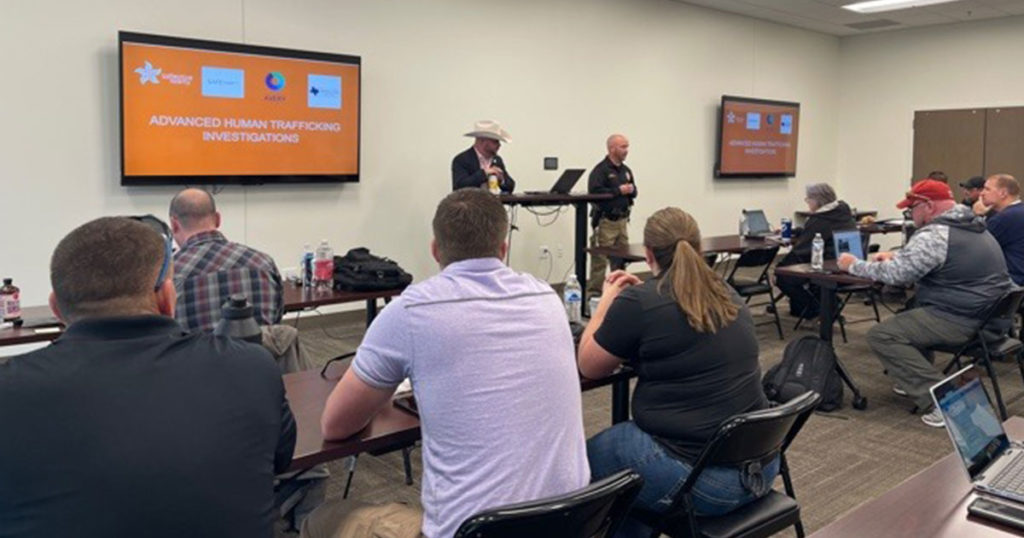 The training was brought to Sweetwater County through the efforts of Uprising, a Wyoming-based nonprofit committed to empowering communities to confront sex trafficking and exploitation through awareness and prevention education, in coordination with local nonprofit Sweetwater Against Trafficking.

“Trainings are designed to give law enforcement a basic understanding of human trafficking, the laws that are used to combat it, and what it looks like nationally, since movement through multiple jurisdictions is normal,” Scaramucci said.

The Reality of Human Trafficking in Wyoming

Markham said human trafficking can easily go unnoticed due to the the lack of self-identification of victims and survivors and the lack of training for professionals in the state to learn to identify victims.

“By raising awareness throughout our communities, and hosting professional trainings, we are able to start conversations that help people realize the reality of trafficking around them,” she said.

In addition to the investigations and operations training, law enforcement also underwent victim advocacy training where they heard directly from survivors of human trafficking, emphasizing the realities of these cases.

“We work on how to empower and support survivors of trafficking, understanding how trauma manifests and presents, and how to investigate the crimes with the victims’ needs being met,” Scaramucci said.

Megan Lundstrom from the Avery Center for Research and Services and Allie Franklin with SAFE Alliance Austin are two survivors of human trafficking who now use their lived experiences to education law enforcement on how to empower and support survivors of trafficking.

“I was trafficked between the ages of 23 and 28, and was able to exit in December 2012. My trafficking happened in 23 states including Wyoming, which is why this particular week of training is so important to me personally as well,” Lundstrom said.

Throughout the week, Lundstrom worked to contribute to the education of law enforcement, medical professionals and victim service providers to increase identification and intervention efforts.

“The trainings here this week have provided law enforcement with the stark reality of the harms that come to victims of trafficking when they are criminalized, and equipped them with information and tools to build trafficking cases that are not dependent upon victim testimony,” Lundstrom said.

Additionally, the trainings have included education on the cultic theory of sex trafficking to better understand the grooming and brainwashing that occurs to victims by their abusers, Lundstrom said. They also discussed the typologies of traffickers to understand specific behavior and visual identifiers, and best practices for intervention and recovery services.

Scaramucci said that he believes the Sweetwater County law enforcement is committed to conducting proper investigation of trafficking.

“I think the training being hosted itself shows the law enforcement commitment to properly investigating trafficking, and holding traffickers accountable, and provide assistance to victims. They seem very eager to learn more and look deeper into trafficking,” Scaramucci said.

As part of the training, the organizations and the Sweetwater County Sheriff’s Office ran a human trafficking sting operation, in which ads for buying sex were placed in Salt Lake City, according to Scaramucci. This operation resulted in four arrests.

“As an extended culmination of the training, an operation was conducted to identify and arrest sex buyers, who contribute to the dammed for human trafficking,” Markham said.

John Martin Hastert, 62, of Rock Springs; Allen Lee Pahl, 50, of Point of Rocks; Conor Michael Latta, 28, of Gillette; and Kenneth Daniel Nosich, 58, of Rock Springs, were all arrested for alleged solicitation of an act of prostitution as a result of the operation.

In the case of Hastert, he allegedly made arrangements to meet the operative at 4 p.m. on Thursday, April 29 at the hotel, according to court documents. Law enforcement officers were waiting for him in the room when he arrived, and court documents state Hastert resisted arrest as officers tried to detain him.

Scaramucci said that the fact that four men were arrested for alleged solicitation of an act of prostitution in one day in Rock Springs shows that it is happening in Sweetwater County.

For more information about the operation, watch the video below in which Scaramucci and Markham discuss how sex buyers and human trafficking are connected, and answer other questions.