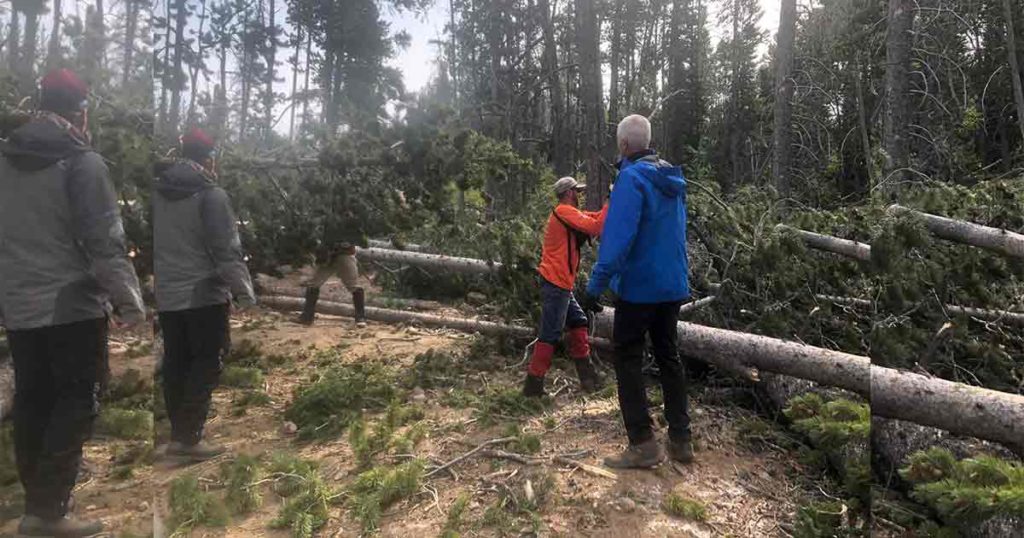 Paths has to be cleared to reach those who were trapped.

PINEDALE — Sublette County had a Labor Day weekend to remember with the extremes in the weather and Tip Top Search and Rescue volunteers spent it responding to a variety of rescue calls.

The rescue responses began Saturday, September 5th, with a call from Fremont County Sheriff’s Office asking for assistance with a climbing fatality on Pingora Peak. A female climber had fallen approximately 400 feet off the South Buttress. The precursor to the recent storm was bringing strong winds and members of our Short Haul team had to carefully worked their way into the Cirque of Towers in order to drop off two members to assess and assist the fallen climber and her partner. CPR was performed for over 30 minutes by SAR members and bystanders. Unfortunately, the climber succumbed to her injuries from the fall and was pronounced dead on scene.

Due to the rapidly approaching storm and increasing winds, the decision was made by Fremont County to wait until the early hours of Sunday, September 6th, for Tip Top SAR’s helicopter team to return and bring the deceased to the Fremont County Coroner. The day of September 6th, the winds were calm and the team had no issues preparing a sling load for transport under the helicopter on a static long line with a successful rendezvous with Fremont County officials.

Tip Top SAR sends our condolences to the climber’s family and everyone that witnessed this unfortunate accident. It was noted by the SAR team that there was a high volume of people both in the Cirque of Towers, as well as climbing the surrounding peaks.

Prior to returning to the Cirque of Towers on Sunday to complete the Fremont County assist, Tip Top SAR received two altitude mountain sickness reports Saturday night. Both were for persons who were ill, unable to continue due to little rest and not hydrating enough. The Bridger-Teton Pinedale District Ranger gave permission for the team to access the ill patients with the team helicopter. The first trip with a helicopter team was above Kevin Lake in the Upper Green for a 67-year-old male whose wife activated an emergency beacon. He was brought to awaiting medical staff at the Pinedale Medical Clinic.

The next rescue, a 39-year-old female, hiking solo and camped near Island Lake was extricated and brought to the Pinedale Medical Clinic. This request for a medical rescue was reported by a USFS backcountry ranger in the area that had sat with her during the previous night to monitor her condition and help if possible.

Sunday, September 6th, Tip Top SAR and Sublette County Dispatch were notified of a personal locating beacon emergency alert in the Dad’s Lake area, north of Big Sandy Trailhead. The call came in after dark and it was reported the male at this location was suffering from symptoms of altitude mountain sickness. The man was unable to self-evacuate due to extreme illness and dehydration. Members of Tip Top SAR medical team were flown to his location at sunrise Monday, September 7th, evaluate his condition and provide assistance. It was determined the man would not be able to hike out on his own so he was flown to the Pinedale Medical Clinic where he was evaluated and treated.

During the early hours of Tuesday September 8th, Tip Top SAR members were alerted to two pending calls. The first came right before midnight and the second around 2:40 am. Both emergency notifications came from separate parties during the horrendous storm that blew through Sublette County during the night and were needing rescued from the aftermath of the wind and snow. The aftermath of the storm would present many challenges for the SAR team and plans changed hourly as more information was gathered of the damage the wind had created in the tree-covered access trails.

A solo hiker was hunkered down in his tent near Cross Lake when the wind shredded his tent, leaving him exposed to the snow and ice as well as the low temperatures. He had been traveling light, and was in the middle of his trek from Green River Lakes to Big Sandy. No movement was noted during the night and information collected by the SAR team was that he had a pre-existing brain condition that was of concern. The second beacon came from a father-daughter duo on horses. They had initiated the emergency response at Crescent Lake after becoming concerned for their safety through the night with the wind tearing at their tent and for the safety of their three horses and one mule.

A SAR horse team was being assembled through the night until the Command team got word of the impassable trails due to the trees knocked down from the wind. A 10 person team of SAR members and Sublette County Sheriff personnel gathered at daylight and a plan was made to access the wilderness boundary near Wolf Lake with UTV’s and chainsaws, via the Pocket Creek trail. Once the team reached wilderness, they would split into two smaller groups to hike to both Cross and Crescent lakes to evaluate the individuals in distress. The teams had use of a wheeled litter and horses to pack gear. A helicopter team was placed on standby in case there was a break in the weather, as the winds were too sporadic and violent to fly. Joel Klosterman with the Bureau of Land Management office, used a chainsaw to begin clearing the Scab Creek trail, while the TTSAR and Sheriff’s Office made their way up Pocket Creek.

At 12:23 pm, the clouds near Wolf Lake began to clear and a small window allowed the helicopter team to launch and arrive at the coordinates for the solo hiker near Cross Lake. They located a tent matching the description of the 51-year-old male shredded to bits, with ice and snow packed inside. They also found the reported sleeping bag matching the right color surrounded with wind-packed snow. Despite being extremely cold, the man was able to walk to the helicopter under his own power and was taken to the Pinedale Medical Clinic for evaluation.

The Communication Center in Houston, Texas, noted the horse crew’s beacon had begun moving towards Scab Creek and had turned their emergency “911” message to “OK” mode. This turns off any tracking ability. The helicopter flew to the coordinates of the original notification of the father-daughter group to confirm they had moved from that location. After confirmation, the helicopter was able to locate a man with a string of horses on the Scab Creek Trail. He was unable to travel any further with the massive number of downed trees around the hill. His daughter was able to find her way down the trail without the horses and was found by Klosterman. She helped him return to her father’s location to get the entire party out of the mountains. They were in good condition other than being scared and thirsty. The SAR members working towards Wolf Lake were informed to stand down and return to the SAR building.

Thanks to the Bousman family, especially Joel, Susan, and Cotton, for not only letting us access the gate for this response, but for their labor and use of their equipment, manpower, and horses. Thompson Outfitting camp staff also arrived with Pocket Creek residents to assist with chainsaws and manpower. A big thanks to the BLM staff as well as USFS seasonal staff for responding to help at Scab Creek.

Wednesday, September 9th, came with more distress calls and Tip Top SAR was waiting to assist a cold and wet hiker on the Pole Creek Trail, but he was able to self-rescue and made it to the Elkheart Park parking lot. The helicopter was also requested by the Fremont County Sheriff’s Office to help with three rescues of nine individuals stranded due to the snow and temperatures. Tip Top SAR and the helicopter were able to extricate hikers from Deep Creek Lake, Valentine Lake, and to a location south of Atlantic City for a stranded medical emergency.

All of these people were flown to the Lander Airport at the request of the Fremont County Sheriff. We were happy to help our neighbors who not only had the horrendous winds, but received snow in amounts from 2”-5” rendering trails impassable.

It’s hard to put into words the condition of the mountains after this recent storm. The mass of tangled trees is powerful in places. Please use caution with your upcoming travels into the backcountry. Please plan for extra time to navigate to your destinations, and have the proper clothing and provisions for a drastic change in a short period of time.